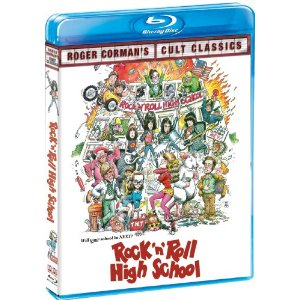 Video Event of the Week: Might we be talking about Warner Home Video's various disc editions of Invictus, Clint Eastwood's odd revenge epic with Morgan Freeman as a dour Nelson Mandela? Might Lionsgate's DVD of The Spy Next Door, yet another forgettable Jackie Chan comedy where the outtakes are funnier than the movie itself, conceivably get the nod? Or against all the odds, is Extraordinary Measures, the Sony Blu-ray of the Harrison Ford/Brendon Fraser flop weepie, by any chance The One?

All worthy, I suppose, although I can't quite imagine actually sitting through those last two, but for my money it's got to be Shout! Factory's pretty spectacular new restored Blu-ray version of Alan Arkush's 1979 classic trash musical Rock 'n' Roll High School, starring The Ramones and P.J. Soles.

If you've never seen it, of course, I don't want to oversell R&RHS -- A Hard Day's Night it's not, a fact that was apparently deeply disappointing to a lot of older punk enthusiasts at the time of the film's original release. Essentially, it's an AIP Beach Party flick of the 60s remade with a certain soupcon of 70s irony; as for The Ramones themselves, when not lip-synching their admittedly terrific songs they have little to do except stand around looking somewhat confused, and while they can act after a fashion let's just say that lines give them trouble.

Not that any of that really matters, of course. The film is often very funny -- Warhol Factory refugee Mary Woronov, as the principal is practically a walking sight gag --  and Soles and co-star Dey Young are beyond adorable as the world's biggest Ramones fan and her ugly-duckling sidekick. Plus, the soundtrack is non-stop great and (Spoiler Alert!) they blow up the school at the end, a finale that, frankly, just about everybody I knew had been dying to see on the screen since forever.

Here's a little musical number to give you a taste of the film's rather sweetly rebellious energy.

Shout! Factory's new version features an exemplary transfer (doing full justice to the film's rather cheesily garish punk look, although a Dolby stereo remix might have been nice), and the Blu-ray features scads of bonuses, including a couple of making of docs, the complete audio of the actual Ramones live concert in the film (the audio heard in the finished version was rerecorded in the studio) and, best of all, a new interview with Soles, Young and co-star Vincent Van Patten. Soles looks like somebody's mom now, but she has an amusing story about how Rosanna Arquette kept shooting her the evil eye during auditions, and Young -- who to my surprise is the younger sister of hippie bombshell Leigh Taylor-Young -- iturns out to be seriously sexy in middle age. Which, come to think of it, is something that can be said about Rock 'n' Roll High School itself.

In any case, a worthy return to home video; you can -- and frankly what are you waiting for? -- order it over here.

And that said, and since things are doubtless going to be a little quiet around here for the next couple of days, here's a fun and obviously relevant little project for us all:

From Cocteau's novel about two of the most appalling teenage siblings imaginable.

High school teens -- including the young Keanu Reeves and Crispin Glover, both superb -- discover one of their pals is a killer. One of the great lost masterpieces of the 80s; director Hunter has mostly done television since, but even if he never makes another feature, his reputation should be secure.

If for no other reason than this great line, delivered with just the right note of whiny ruefulness by Winona Ryder: "Dear Diary, my teen-angst bullshit now has a body count."

Lycanthropy as a metaphor for the thousand ills of late adolescence. Drive-in flicks just don't get any more profound.

And the Numero Uno sorrows of young Werther-ish film about alienated high school kids, why are we even arguing, quite obviously is --

Gloriously lurid anti-German WWII propaganda film about those nutty Nazi teens next door (next door if you happen to live in Berlin, obviously). Naturally, for this service to his country, director Dmytryk was red-baited and ultimately jailed during the McCarthy Era.