From our department of Significant Video Programming Notes From All Over: Turner Classic Movies will be showing one of the least familiar works in the John Ford canon tomorrow afternoon. I refer, of course, to the great director's last film -- the war-torn China epic 7 Women, from 1966.

7 Women was a commercial flop in its day, despite generally favorable reviews, but for whatever reason it's largely disappeared down the memory hole in discussions of Ford. A woman's picture -- and a feminist one, at that -- would seem to be an interesting departure for the legendarily tough guy man's man director, but that angle aside, the film is obviously worth seeing if only for the ensemble cast, which includes star Anne Bancroft as well as Brit veterans Flora Robson, Anna Lee and the oddly undervalued Margaret Leighton. The always interesting Betty Field, who played the incest victim in the astounding King's Row, and who didn't do nearly enough films, is in their as well.

And speaking of somebody who didn't do nearly enough films, the real reason -- for my money at least -- to see 7 Women would have to be the presence of Lolita nymphet Sue Lyon --

-- playing against type in a role described in the trailer above as "unexpectedly demure." 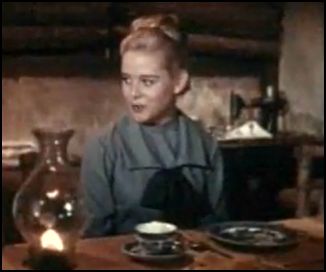