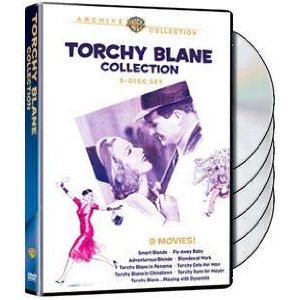 Well, call me shallow if you will, but despite the plethora of horrors in the news over the last few weeks, this morning I am in a fine mood. The reason? The home video gods (in this case, more specifically, the folks who put together the packages over at the Warner Archives)  have favored me with a copy of their just released Torchy Blane Collection, a five disc 9 movie set featuring the complete B-mystery/adventure series starring girl of my dreams Glenda Farrell.

Farrell was one of the two great brassy wisecracking blondes at Warners in the 30s and 40s -- the other was Joan Blondell -- and she's probably best known as the boarding house jezebel who blackmails Paul Muni in I Was a Fugitive From a Chain Gang. She forever won my heart, however, as the gutsy girl reporter in the 1933 Mystery of the Wax Museum, where she makes one of the greatest entrances in film history -- sashaying into a police station and asking an old Irish cop "Hey toots, how's your sex life?" Truly, they don't make 'em like that anymore.

That character is essentially the prototype for Torchy Blane, a big city crime reporter whose exploits Warner Bros. chronicled between 1937-39. Her foil and love interest in the films was the gruff, slightly sexist but otherwise loveable, police detective Steve McBride, usually played by tough guy actor Barton MacLane; MacLane was typed as a villain in A-pictures, but in the Torchy series he shines as Farrell's are-they-an-item-or-not? love interest. It is perhaps also worth noting that Torchy was the admitted inspiration for the Lois Lane character in the Superman comics; Man of Steel creator Jerry Siegel even named his Daily Planet star after actress Lola Lane, who took over for Farrell in the two weaker films that closed the series.

In any case, all the Farrell entries in the new box set are fast, breezy fun -- consistently well plotted and, in the four entries directed by the unjustly forgotten Frank McDonald, hardly ever betraying their low budget origins. Which is to say they hold their own against a lot of better known genre pictures (the last couple of Thin Man's, for example). And, of course, Farrell herself is just endlessly watchable.

Here's an archetypal scene, from Smart Blonde (Torchy's debut), to give you an idea of the overall tone of the series and the chemistry between Farrell and MacLane.

Warner Archive's edition of the complete series derives from prints in spectacular shape and looks terrific throughout. The set is no frills, of course, but it's also eminently affordable; you can -- and I would say very definitely should -- order it over here toot sweet. And as for the horrors in the papers and on the TV news, I promise I'll be depressed about them starting tomorrow.