Great Lost Z-Movies of the 50s (An Occasional Series) 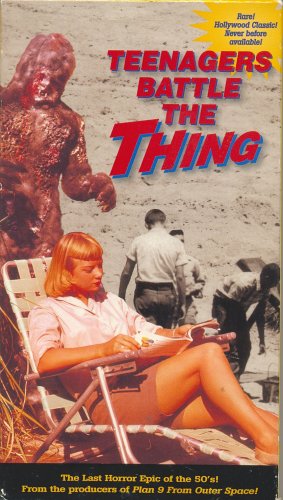 The things you can discover on the Intertubes.

For example, the other day I was browsing the public domain film listings over at the invaluable Internet Archives, when I noted that there was an actual movie -- available for actual viewing or download -- with the charming and evocative title Teenagers Battle the Thing. From 1958, no less, and in black-and-white.

I also learned that although said film's Thing had nothing to do with the titular creature in the Howard Hawks sci-fi classic The Thing From Another World (from 1951), and (alas) even less to do with The Thing from The Fantastic Four comic books (unlikely, since Ben Grimm and company didn't debut until 1961), the film itself had been padded out with new footage (in color!) in 1978 under the title Curse of Bigfoot. Although the critical consensus, at least among the sort of people who actually care about that sort of stuff, seemed to be that (in the immortal words of Dobie Gray)  "the original is still the greatest."

I was also much taken with this pithy critique by an uncredited fan reviewer.

Some high school kids out on an anthropology field expedition discover a mummified monster. It wakes, and attacks a couple of people. They destroy it in short order. No actors were involved in the making of this picture.

In any event, as mentioned, you watch the original version (or even download it) for free at said Internet Archive over here. I think I can safely say that, at the very least, the film lives up to the review.