How Bad Could It Be?: The Next Hoot You Hear 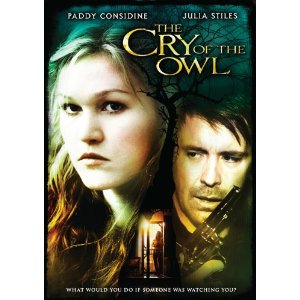 Just got done watching the new Paramount DVD of The Cry of the Owl, a sleeper wannabe psychological thriller that had a limited theatrical release earlier this year. Unsurprisingly, I missed this one at my local Hell Octaplex (I'm not even sure it played anywhere in my area, now that I think of it), but given that it stars the lovely and talented Julia Stiles (the Bourne trilogy girl I've had a deeply inappropriate thing for since her turn as a teenage temptress in David Mamet's State and Main) and since it derives from a novel by Strangers on a Train/Talented Mr. Ripley writer Patricia Highsmith, I figured what the hey -- it might be worth a look.

Enigmatic loser Robert Forester (Paddy Considine) tries to recover from a messy divorce by hiding out in a small town. Said small town having very few entertainment options, and unable to afford anything but basic cable, the poor dope becomes fascinated by the seeming domestic bliss of Jenny Thierolf (Stiles), who he secretly watches through her window. Okay, he's actually stalking her. Eventually Jenny, showing the poor judgement that will become her defining characteristic, invites the guy in, and the two begin a relationship, much to the chagrin(!) of her boyfriend. And when said boyfriend goes missing, Robert finds himself the number one suspect in a murder investigation, and wondering if Jenny is exactly who he thought she was. Or something. Anyway, it gets incredibly convoluted before the big surprise ending and then they all go to Red Lobster for the Pirate special.

Okay, I made that last bit up. Here's the trailer to give you an idea of the film's vaguely creepy rural mise-en-scene.

Anyway, the answer to our earlier question is "not bad at all, although the phrase 'Wait for the aforementioned basic cable' does spring rather immediately to mind." It doesn't really hang together (and the aforementioned big surprise ending is something of a yawn) but director Jamie Thraves stages the whole thing in an almost classically cool and reserved way, and he's helped immeasurably by a couple of interesting performances. Stiles is wholly believable as the is-she-vulnerable-or-manipulative? femme fatale, and Considine, who suggests a sort of coiled-spring neurotic version of D.B. Sweeney, is even better as the poor film noir sap. The film is ultimately stolen, however, by Bruce McFee as one of the de rigueur pair of Mutt and Jeff cops investigating the boyfriend's disappearance; he's about as creepy and sepulchral as you could imagine, and you can't take your eyes off of him whenever he shows up.

In any case, you can -- and I wouldn't make fun of you if you did -- order The Cry of the Owl in advance of its migration to TV  over here.