Weekend Cinema Listomania (Special Say What You Will About the SS, But They Were Snappy Dressers Edition) 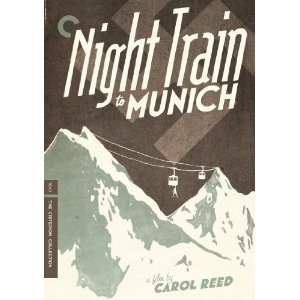 Video Event of the Week: Might the Strand DVD version of Bluebeard, the folktale adaptation from (as they say) professionally transgressive French filmmaker Catherine Breillat be what we're talking about? Is Oscilloscope Picture's disc of The Maid, the Chilean domestic drama from director Sebastian Silva, in fact in contention? Or could Universal's various disc versions of Green Zone, the Matt Damon hunt for WOMD flick that didn't find the audience in theaters that it probably deserved, actually be The One?

All worthy, to be sure, but for my money it's the long overdue Criterion Collection DVD version of (Sir) Carol Reed's 1940 Night Train to Munich, the Brit spies VS Nazis thriller that just may be the best Alfred Hitchcock flick the master never made.

Night Train gets compared to Hitchcock's peerless choo-choo melodrama The Lady Vanishes a lot, and with good reason; it was scripted by the same screenwriting team of Sidney Gilliat and Frank Launder, plus NT star Margaret Lockwood was also the heroine in the earlier film and, perhaps most tellingly, the hilarious team of Naunton Wayne and Basil Radford reprise their roles as the cricket obsessed Caldicott and Charters, two hilariously dense Brits who turn out to be surprisingly cool hands in a crisis.

I've made the comparison a lot myself, but seeing it again for the first time in a while it occurred to me that -- and Wayne and Radford are a big part of the reason --  a perhaps apter analog to Night Train would be Ernst Lubitsch's original To Be or Not to Be, which has a similar closing sequence with the good guys trying to escape from German occupied territory while dressed up in Nazi drag. In any event, that's NT star star Rex Harrison, of course, below right in the SS outfit; Wayne and Radford are the guys looking slightly pained left and center.

Night Train isn't quite up to the level of Hitchcock's early masterpiece; the mechanics of the thing are perhaps a little too obvious, and the characters are a little less fleshed out than they are in Lady, but Reed's effort remains an absolutely first-rate entertainment, mixing thrills and comedy in the sort of deft manner that has become a lost art in contemporary film (I'm talking to you, The A-Team. You can bite me Knight and Day). The Criterion version derives from an original negative in spectacularly good shape, and it looks sensational; back in the laserdisc era, the best available video version of NT was from the Roan Group, who did a nice restoration of a public domain print, but the Criterion DVD offers vastly superior detail and cleaner sound.

The bottom line, of course, is that this one's a real treat, and you can -- and very definitely should without delay -- pre-order it over here.

Okay, with that out of the way, and given that as usual it's going to be a trifle quiet around here for a couple of days, here's a perhaps obvious and obviously relevant little project for us all:

Best or Worst Screen Performance as a Nazi by an Actor or Actress!!!

I frankly didn't think Thorne could top her work in the earlier Ilsa She Wolf of the SS, but gosh darn it if she doesn't absolutely knock it out of the park here!

Welles is absolutely chilling as the nutty Nazi literally next door -- incognito, of course, hiding out in post-WW II New England academia and married to Loretta Young to boot. 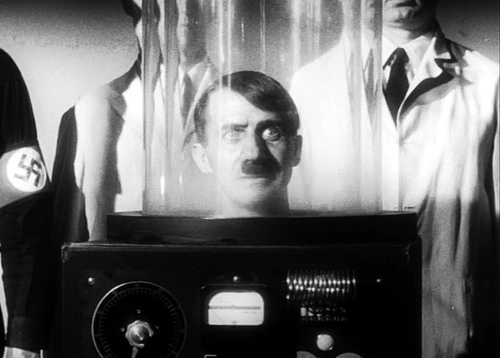 Steve Van Zant famously said of his performance in The Sopranos that "the wig does fifty percent of the acting." In the case of Freed's performance in They Saved..., I think it's the mustache, and it's probably doing closer to one hundred.

As the Jew-hunting Gestapo guy who really enjoys his work. And a star was born, obviously; one of the most entertaining breakthrough performances of the decade.

And the Numero Uno you vill show us your papers! performance, let's be honest it's not really a contest, just has to be ---

This is a pretty good film, if truth be told, and Ganz is actually terrific in it. That said, I'm including his performance mostly because it inspired a thousand parody viral "Hitler Reacts to...!" videos on YouTube. Heh.