When the Shark Bites...

Okay, I'll grant you it's not a discovery along the lines of Schliemann unearthing Troy, but it's still pretty cool.

Bruce the Shark has been found!

The star of Jaws has been found resting in a Los Angeles junkyard. No, not Richard Dreyfuss -- the shark! With the 35th anniversary of Steven Spielberg's classic blockbuster just around the corner, an NPR reporter set out to track down the mechanical beast that struck fear into the hearts of so many. 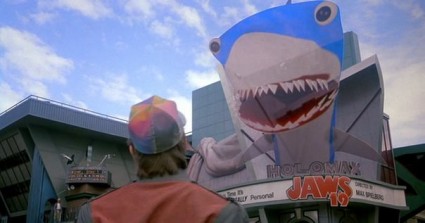 In order to maximize their control over the creature, the Jaws filmmakers built three sharks for their 1975 movie. All created from the same mold, the sharks were dubbed "Bruce" after Spielberg's lawyer, Bruce Ramer. The gigantic metal creatures were 25-feet long and weighed hundreds of pounds. The heads alone came in at 400 lbs. apiece, with jaws the size of a small human. But theories circulated on a Facebook page for the famous shark that another Bruce might be out there. When reporter and Jaws-enthusiast Cory Turner set out to track down Bruce's whereabouts, he went straight to the source -- the movie's director. A spokesman for Steven Spielberg explained that the original Bruces had all been destroyed, as no one had thought to save them.

After a little research, Turner discovered that a fourth shark had indeed been cast from the original mold, just months after its brothers were constructed. The baby of the Bruce family was created for display at Universal Studios Theme Park, where it hung by its tail for fifteen years. In 1990, the shark was taken down and shipped out to destinations unknown. Turner picked up the phone and started dialing junkyards. He finally found the creature in a yard in the Sun Valley area of Southern California -- just minutes away from Universal. Turner brought the team who built Bruce -- art department members Joe Alves and Roy Arbogast to verify the shark's authenticity. "It's the real one," Arbogast told Turner after examining the creature. "It's just kinda' nice to see it again after 25 or 30 years. It's amazing that it's still here."

This is of course, splendid news, but I can't help but think of the great Michael J. Fox line in Back to the Future 2. Fox's Marty McFly finds himself in the year 2015, in front of the movie theater in his old home town, which is showing Jaws 19. At which point a giant holographic Bruce lunges out at him from the marquee.

You can see the moment in the clip below at approximately 7:45 in.