Which Way to Mecca, Drac? 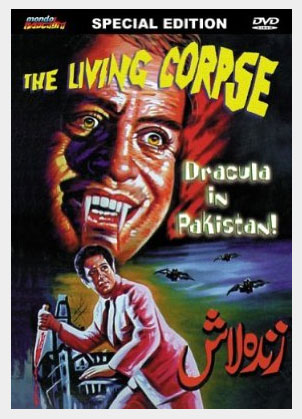 An expatriate American friend in Switzerland writes (via e-mail):

I couldn't sleep last night and so stumbled upon a late-late movie on tv which might interest you (as you seem interested in weird and and/or crappy cinema). It was called Dracula in Pakistan, and it is indeed a Pakistani film from 1967; the director's name is Khwaja Sarfraz (say that three times fast). It was actually not a bad film; the dialogue/acting is no worse than a typical Perry Mason episode. Your basic b&w vampire flick, with a Muslim twist. (Although it was pretty secular throughout, there are cultural references, just as there would be with Christian culture in a western vampire flick.) The incidental music is a hybrid of 60's jazz/Horror/Bollywood! See if you can find it somewhere.

To be honest, my initial reaction to this was that my Alpine correspondent was pulling my leg, but a little web research quickly made it clear that yes, this was in fact a real film. According to a certain on-line encylopedia with little credibility, Dracula in Pakistan -- that's the U.S. title; in its home country it was Zinda Laash and the rest of the world saw it as The Living Corpse -- is indeed a Middle Eastern version of the classic Dracula story, and the screenplay (co-written by the aformentioned and charmingly monikered Sarfraz) seems to be suspiciously similar to Hammer's Horror of Dracula, the 1959 hit that made an international star out of Christopher Lee.

The film was also, apparently, the first ever given an X-rating in Pakistan.

Here's DIPs big nightclub scene; I suspect this is the sort of thing that got the Pakistani censors salwars in a twist.

And here's the big finale -- which is, indeed, highly reminiscent of the ending of Horror of Dracula, with the vampire count, in a battle to the death with the Van Helsing character, finally dispatched by the first rays of the rising sun.

Actually, this looks quite a bit better than an average episode of Perry Mason (and I like Perry Mason, by the by). If you'd like to see more, there's  apparently a beautifully restored DVD version available from the genre specialists at Mondo Macabro Video.

You can order Dracula in Pakistan right here;  I don't think there's any doubt that I'm going to, and ASAP.

I should also add that a coveted BOX OFFICE No-Prize will be awarded to the first reader who -- without Googling -- identifies the famous horror novelist and screenwriter whose 1958 autobiography inspired the title of today's column.