Okay, so if you weren't here yesterday, basically I announced that I had had it up to here with loud stupid movies based on video games or crappy toys that some protracted in the molar Gen-X studio exec once had as a kid.

Hey, the July 4th weekend was really hot and I was cranky. Plus, I had just heard they're actually making yet another loud stupid Transformers flick even as we speak.

Anyway, I came up with what I thought, and still think, was an interesting Modest Proposal for said studio exec, or anybody else contemplating making a film like that: Do me a favor and don't. Instead, I suggested -- and this would be free, mind you; I don't even want an "inspired by an idea dashed off on a napkin over lunch at a trendy LA eatery by Steve Simels" credit -- that said studio exec try to make a film that lives up to artist Henri Fuseli's deeply disturbing and ahead of its time 1785 masterpiece of the macabre The Nightmare.

So far, I haven't heard a peep, although obviously it was slow over the holiday. That being the case, I'm gonna throw another one out there, and again -- it's totally gratis and based on something in the public domain.

So, mister studio honcho or big shot director -- from somewhere between 1819-23, here's Francisco Goya's even more disturbing Saturn Eating One of His Sons. 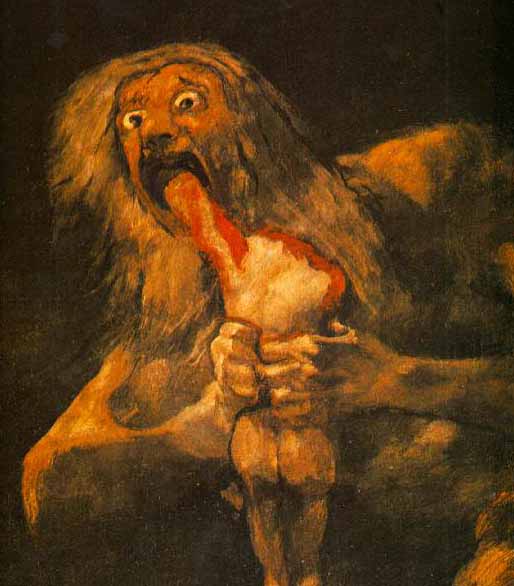 Now go try and make a movie -- maybe a horror flick, maybe not -- with even a fraction of the painting's overwhelming miasma of madness and despair.