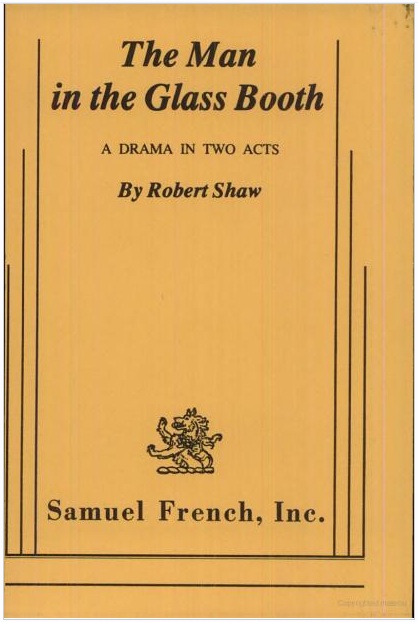 And speaking as we were yesterday about Oliver Stone's mea culpa in the direction of my fellow Red Sea pedestrians, I'd be remiss if I didn't mention perhaps the most notorious celebrity exoneration of them all. I'm referring, of course, to the huge "sorry about that" dispensed our way by Pope Paul VI in 1965, and -- more to the point -- its rather controversial dramatization, on stage and screen, courtesy of the late great Robert Shaw.

These days, Shaw is probably best remembered for his role as the obsessed shark hunter in Steven Spielberg's Jaws, but he was also a pretty significant playwright and his The Man in the Glass Booth remains one of the theatrical touchstones of the 60s.

The plot (courtesy of a certain on-line encylopedia with zero credibility):

Arthur Goldman is Jewish and a Nazi death camp survivor. Now a rich industrialist, he lives in luxury in a Manhattan high-rise. He banters with his assistant Charlie, often shocking him with his outrageousness and irreverence about aspects of Jewish life. One day, Israeli secret agents kidnap Goldman and take him to Israel for trial on charges of being a Nazi war criminal. Goldman's trial forces his accusers to face not only his presumed guilt, but their own as well. At the end it appears that Goldman falsified the dental records which the Israelis used to identify him in order to bring about the trial. When the deception is revealed by the Israeli prosecutor, Goldman is left standing in the trial court's bulletproof glass box, a broken man. The stress shatters his mental health, and he becomes catatonic. He then relives in his mind a Nazi firing squad execution and dies.

Obviously, this was based in part on the case of real life Nazi war criminal Adolf Eichmann, who was plucked from his hiding place in Argentina by Israeli secret agents in 1960 and taken back to Jerusalem to stand trial (said trial broadcast on TV around the world).

Shaw's take on l'affaire Eichmann was wildly (and often deliberately) misunderstood, although to be fair, he obviously meant it as a provocation. Beginning with this little bit of bombshell dialogue from early in the 1st act:

[Historical note for our younger readers: Both Goldman (the character) and Shaw (the author) are referring here to the papal enyclical  Nostra Aetate, in which the aforementioned Paul VI more or less acquitted my co-religionists of the crime of deicide, an admittedly well-meaning gesture that some of my colleagues amongst the ironically monikered Chosen People felt was the proverbial day late and a dollar short. But I digress.]

In any case, the play was filmed by Love Story director Arthur Hiller in 1975, with Maximillian Schell chewing the scenery as Goldman; Shaw himself hated it, but on its own perhaps pulpier than intended terms, it's a nonetheless powerful and even thought-provoking meditation on the idea of collective guilt.

Here's the trailer, to give you a little idea of the style of the argument.

Like I said, Shaw hated it (whether that's because of Schell's preposterous bald piece is a secret that he took to his grave) but overall it mostly works. Incidentally, the MITGB adaptation was originally produced for the American Film Theatre, a remarkable series (1973-75) of limited theatrical release adaptations of famous or important stage plays shot with all-star casts and A-list directors; the series also included a Harold Pinter-directed Butley with Alan Bates and a Lee Marvin version of The Iceman Cometh directed by John Frankenheimer, both of which behoove beholding.

Meanwhile, you can order a DVD of The Man in the Glass Booth over at Amazon here.