How Bad Could It Be?: The (Not Particularly) Defiant Ones 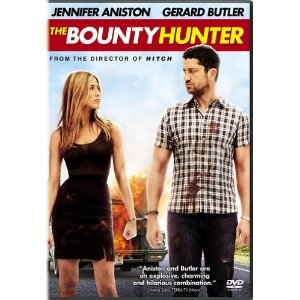 Well, I just got finished watching Sony's new DVD of The Bounty Hunter, the romantic action comedy starring Jennifer Aniston and the ridiculously over-exposed Gerard Butler. Unsurprisingly, I missed this one at my local Hell Octoplex earlier this year (hey -- life is short). But I still have kind of a soft spot for Aniston, who let's face it remains a deft comedienne, and given that the film was directed by Andy Tennant, the guy responsible for the (IMHO) modestly undervalued Will Smith vehicle Hitch, I figured what the hey -- it might be worth a look.

Milo Boyd (Butler), a down-on-his-luck bounty hunter, gets his dream job when he's assigned to track down his bail-jumping ex-wife, reporter Nicole Hurly (Aniston). Milo thinks all that's ahead is an easy payday, but when Nicole gives him the slip so she can chase a lead on a murder investigation the usual wacky complications ensue -- and they find themselves running from a squad of giant killer robots from outer space that can disguise themselves as GM cars and trucks.

Okay, I made that last part up, but since the rest of The Bounty Hunter script is otherwise such standard bickering-opposites-chained-together kind of stuff, I thought it might spice things up a little if I lied.

In any case, here's the trailer to give you an idea of the film's actual mise-en-scene, if that's not too pretentious a phrase for it.

Anyway, the answer to our earlier question is "Not so bad that if it was the only in-flight movie available I'd cancel the reservation and find a plane with a better film going somewhere else." But pretty dull stuff, actually; Butler -- underplaying his charming macho loutishness for a change -- comes across like a pale road show version of the young Mel Gibson, and he and Aniston, who's at least game, have somewhere between zero and no chemistry. Some of the supporting players are amusing, however, in particular SNL alumnus Siobbhan Fallon, who steals every scene she's in as the eccentric secretary to Butler's bail bond boss Jeff Garlin, and if you can stay awake you'll catch the always amusing and lately much missed Carol Kane in what amounts to a cameo. Beyond that, however, this one pretty much defines pro forma filmmaking; bonuses on the disc, which could also be described with that phrase, include a couple of utterly forgettable making-of docs that, shall we say, don't really add anything to the sum total of human knowledge.

That said, you can -- and if you're really starved for entertainment you could do worse -- you can pre-order The Bounty Hunter over here.