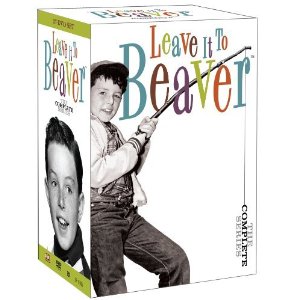 Video Event of the Week: Might we in fact be talking about the Universal/Focus Blu-ray or DVD of Greenberg, the Noah Baumbach-directed comedy with Ben Stiller playing against type (heh) as a neurotic Jew? Is the Criterion Collection's DVD of The Only Son/There was a Father, two films by the great Japanese director Yasujiro Ozu, possibly in contention? Or could (against the odds, granted) Universal's DVD box of Psych: The Compete Fourth Season, from the USA network thriller series, by any stretch of the imagination be The One?

All worthy, to be sure, but for my money -- actually, yours, if you decide to spring for it -- it's got to be Shout! Factory's mindboggling box set of Leave it to Beaver: The Complete Series.

Is anybody else frightened about this?

Actually, I have a confession to make at this point. I know it strains credulity, but despite the fact that I am exactly the right demographic for LITB -- star Jerry Mathers is a year younger than me -- and despite the fact that I devoured just as much 50s and 60s TV as any other self-respecting baby boomer, I never watched the show as a kid. Honest to god. I'm actually not sure why that was, although I think it probably had something to do with the fact that Mathers' Beaver was a dead ringer for an obnoxious younger cousin of mine who lived a few blocks away; I recall thinking that it was bad enough I had to deal with him in real life so I probably didn't need to have him intrude on my fantasy life as well. In any case, let's just say that it wasn't till many years later -- when I watched the show in reruns -- that I realized that Eddie Haskell, the sycophantic weasel best friend of Beaver's older brother Wally (Tony Dow) was, as embodied by kid actor Ken Osmond, one of the great comic creations of the 20th century.

I should also confess at this point that no, I haven't sat through all 6090 minutes of the Beaver box, and any reviewer who tells you he has is a liar. I can tell you, however, having sampled various episodes over the last couple of weeks, that the show is as fascinating a time capsule of Eisenhower/Kennedy era suburban American middle class life (idealized or not) as you'll ever encounter, and that Shout! Factory's high def video transfers, from film elements that have survived without even a hint of the ravages of age, are stunningly vivid. As for the bonuses, they include the usual making-of docs and interviews with original cast members; I will definitely watch them someday, probably in the home when I'm a few years older and have nothing but time on my hands.

The bottom line is, I guess, that Leave It to Beaver: The Complete Series is as important a piece of cultural archaeology as anybody has come up with in living memory, albeit a dauntingly massive one. You can order the box set  here; for the budget conscious, Shout! Factory is also offering a similarly refurbished five-disc version of the show's complete third season and you can purchase it here, secure in the knowledge that it's probably all the Beaver you'll really need.

Okay, and with that out of the way, and because things will doubtless be fairly quiet around here for a few days -- assuming another Mel Gibson answering machine tape doesn't surface -- here's a fun and clearly relevant little project for us all:

Sadly, the definitive cinematic take on the subject -- Lenny Bruce's screenplay for Tract House Chippie -- has not yet been filmed.

And that said, my totally top of my head Top Five is:

Trust me -- this is exactly what it felt like being a suburban teenager in 1962. Not a single detail rings false.

Suburban kids cover up for one of their own, who's a murderer. Based on a true story, and I like to think of it as Axl Rose: The Wonder Years.

Frankly, I thought all those shots of the endless identical houses on the block where the fictional Freeling family lived were a LOT scarier than any of Poltergeist's supernatural mummery. But I kid the cookie-cutter sterility of the suburbs!!!

God, I hated this movie. I'm reminded of what critic Stanley Kaufman famously said about director Arthur Penn's assertion that "America is quite the silliest country." "Compared to what?" he riposted. "Monaco?"

And the Numero Uno look at the unbearable lightness of being in the burbs just has to be....

Home Alone, but with a body count. And John Hughes and Chris Columbus can bite me.