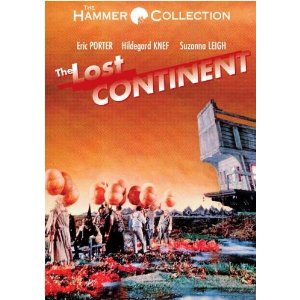 So yesterday, as is my wont, I was once again immersed in the great comforting warm bath that is the New York Times Arts & Leisure section, when the following interesting and yet alarming item jumped out at me. Seems the coolest fright factory of my youth is back in business.

Daniel Radcliffe has committed to making a horror movie for the venerable British horror studio Hammer Films, the [1950s/60s/early 70s] home of gory, goopy, Gothic fright films like Frankenstein and the Monster From Hell, Dracula Has Risen From the Grave and The Quatermass Xperiment.  Press representatives for the studio said on Monday that Mr. Radcliffe, the Harry Potter star who is soon to be unencumbered of those boy-wizard movies, will play the lead in an adaptation of Susan Hill's horror novel The Woman in Black, to be written by Jane Goldman (Kick-Ass) and directed by James Watkins (Eden Lake). The studio also said that Hammer Films, which helped the careers of Christopher Lee and Peter Cushing, is slowly reviving after lying dormant since the 1980s. Now owned by the Exclusive Media Group, the Hammer brand will appear on The Resident, a coming horror movie starring Hillary Swank and Let Me In, a remake of the Swedish vampire film Let the Right One In, directed by Matt Reeves (Cloverfield).

Well, I for one am glad that Hammer's back, and I look certainly look forward to those new films in the pipeline. But still, if anybody's asking, I really want the new studio to do a remake of my all-time favorite Hammer film. I refer, of course, to the classic cinematic mishegass that is The Lost Continent (1968). Starring Hildegarde Knef and some of the greatest rubber monsters ever.

The late great Times film critic Vincent Canby accurately summarized the film's plot back in the day as "... a multilayered, single level, club sandwich about an old tramp steamer that sets out from Africa for Caracas, Venezuela, carrying a cargo of chemical explosives and human rejects. Almost immediately, there is (1) the threat of the cargo blowing up, (2) a hurricane, (3) a mutiny, (4) a shipwreck, and (5) entrapment in the Sargasso Sea where the seaweed eats men, rather than vice versa, and the giant octopuses use green light bulbs in their eyes."

Heh. And as Canby also noted, Hammer's Lost Continent  featured perhaps the funniest theatrical in-joke in screen history. Says the adolescent leader of some mad old Spaniards, whose galleon has been trapped in the Sargasso for centuries: "Am I not El Supremo -- the direct descendant of José Quintero?"

In any case, while we wait for the first films from the revived Hammer, you can order the original Lost Continent on (an apparently splendid looking) DVD over here.