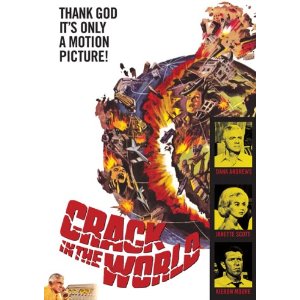 Video Even of the Week:  Might we be talking about Universal's DVD of Repo Men, the futuristic medical thriller starring Jude Law and Forrest Whittaker? Is it, perchance, Paramount's box set of Sgt Bilko: The Phil Silvers Show First Season? Or -- and I consider this extremely unlikely -- would Warner Home Video's various disc versions of Clash of the Titans, the ludicrous remake of the 80s Ray Harryhausen F/X hit, conceivably be The One?

All worthy to be sure (except for that last, which is, not to put too fine a point on it, a real piece of crap) but for my money it just has to be the long anticipated and overdue Olive Films DVD version of the beyond prescient 1965 sci-fi disaster classic Crack in the World, starring Dana Andrews.

The plot, adapted from a certain online encyclopedia with no credibility:

An international consortium of scientists is trying to tap into the Earth's geothermal energy by drilling a humongous hole in the Earth's crust. The project, leader, Dr. Stephen Sorenson (Andrews), believes that a final barrier blocking the trapped energy can easily be overcome by dropping an A-bomb, but the project's chief geologist, Dr. Ted Rampion (Kieron Moore), is convinced that a) the detonation will produce a massive crack threatening the very existence of Earth and b) that Sorenson is bonkers (an opinion shared by the audience).

Eventually, the atomic device is used and the Earth's crust indeed splits open, opening an un-cappable gusher of lava; another bomb is used in the hope of stopping it, but to no avail, and a huge chunk of the planet is poised to be blown into space. Sorenson remains in his underground bunker despite pleas by his wife Maggie (Janette Scott) to evacuate with the rest of the project staff; she and Rampion barely escape in time to observe the fiery birth of a second moon, but fortunately the BP executives who bankrolled the project are not so lucky, and die horrible painful deaths which are lingered over, lovingly, by director Andrew Marton.

Okay, I made up that last part. In any case, I first wrote about this one here back in May, when the parallels between the premise of CITW and the real-life catastrophe in the Gulf of Mexico were so blatant a blind man could see them with a cane, including -- incredibly enough -- putatively serious people suggesting that a nuke might be the only effective way to seal up the BP gusher. Fortunately, it hasn't come to that. Yet.

That said, CITW is a terrific piece of work in its own right; well-written, convincingly acted, and with special effects at least as good as a James Bond flick of the period. Here's the trailer to give you a little taste of its atmospherically apocalyptic ambiance. (How's that for cheap alliteration?)

Olive Films new DVD version is no-frills (i.e. no bonus documentaries, interviews with the auteurs, or outtakes) which I actually find refreshing, but it derives from a print in terrific shape and looks splendid. in any case, the film's cautionary message -- don't mess with Mother Nature -- is obviously rather more pertinent today than it was in 1965, and it's good to finally have the thing readily available.

Bottom line: You can -- and very definitely should, if I'm any judge of horseflesh -- order Crack in the World over here. I should also add that Olive Films has struck a deal with Paramount and will be releasing all sorts of interesting stuff from the studio's vaults in the coming months; Crack is one of five titles -- the others include three excellent vintage noirs (Appointment with Danger, Union Station and Dark City) and the interesting Burt Kennedy western Hannie Caulder  -- in the initial batch of reissues.

Okay, and with that out of the way, and given that things are probably going to be a little quiet around here for a few days, here's a fun and reasonably relevant litttle project for us all:

Best or Worst Dramatic (Non-Documentary) Film Ripped (As They Say) From the Headlines!!!

Based on the true story of real life Wisconsin serial killer Ed Gein. On the other hand, since Gein's crimes first made the news in 1957, perhaps "ripped from the headlines" isn't precisely the applicable phrase here.

On the other hand, this real life story -- of WWI vet turned fugitive Robert Elliott Burns -- was very much in the public consciousness at the time the Brothers Warner released this still powerful indictment of the criminal justice system.

With post-Bridey Murphy interest in reincarnation and hypnotic past life regression still captivating our noble Republic in 1957, ever trendy auteur Corman unleashed this entertaining shlock about a shrink who psychically sends a hooker into the body of one of her ancestors (who, not altogether surprisingly, happened to be a witch. Or something.) In any case, if you can find a non-MSTied version, it's actually kind of a fun film.

Robert Duvall plays an FBI agent tracking down Treat Williams playing history's most famous airline hijacker. In a film so good that you can only find it online with some Russian guys yakking on the soundtrack.

And the Numero Uno fictionalized account of a real life occurence simply HAS to be...

NASA fakes the first manned mission to Mars in a movie studio in the desert. Obviously, this actually happened.

Alrighty then -- and what would YOUR choices be?