Weekend Cinema Listomania (Special Getting Away With Murder Edition) 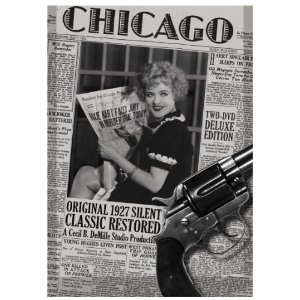 Video Event of the Week; Is Music Box's DVD of The Girl With the Dragon Tattoo, the original Swedish version of the soon-to-be-remade-in-English thriller, possibly the one we're talking about? Could Sony's Blu-ray upgrade of Ray Harryhausen's fabulous FX fantasy Jason and the Argonauts by some chance make the grade? Or is it remotely conceivable that Acorn Media's Doc Martin Series Four, the latest box set derived from the popular Brit TV show, might actually be The One?

All worthy to be sure, but for my money it absolutely has to be the quite astounding Flicker Alley DVD of Chicago, the 1927 Cecil B. DeMille-produced (and mostly directed, uncredited) silent version of the same true story that inspired, among other things, the smash musical and 2003 film of the same name.

The silent version, of course, was filmed barely four years after said true story, in which a Windy City floozy (married, of course) shot one of her (apparently several) lovers and then beat the rap in an early example of what we would now call a media circus. DeMille's film, like the years later musical, is based on a stage play by Maurine Watkins, the real-life reporter who covered the story for one of the Chicago tabloids. The play was also filmed in the sound era, as 1942's Roxie Hart with Ginger Rogers; in that version, however (the Hays Code being in effect) the aforementioned floozy heroine turns out to be innocent of the crime. Heh.

In any case, DeMille's take on the story was presumed to have been lost until a print turned up in his attic in 2006; Flicker Alley's DVD is its first appearance on video, and it's in absolutely pristine shape; I can't recall a better looking video version of a silent film, and it's nicely decked out here with an effective period pit orchestra score compiled by Rodney Sauer.

As for the film itself, I don't want to oversell it, which is to say that its combination of melodrama and media satire doesn't always work, which shouldn't really be a surprise, given DeMille's famously ambivalent relationship with on-screen sin. In any case, the real problem with Chicago's wildly inconsistent tone is probably mostly the fault of star Phyllis Haver. A former Mack Sennett Bathing Beauty, Haver was obviously easy on the eyes, but she's just not that interesting a screen presence nor a particularly deft comedienne, so there's essentially a hole at the center of the picture. Fortunately, some of the other performances are a lot better, in particular those by the oddly Jeff Daniels-esque Victor Varconi as Haver's ridiculously faithful and long suffering sap of a husband, and Eugene Pallette, who holds your attention despite the absence of the trademark vocal rasp familiar from his sound films, as the obnoxious lothario Haver pops. I should also add that film's second half -- the farcical murder trial itself -- plays far more entertainingly than the first half set-up. 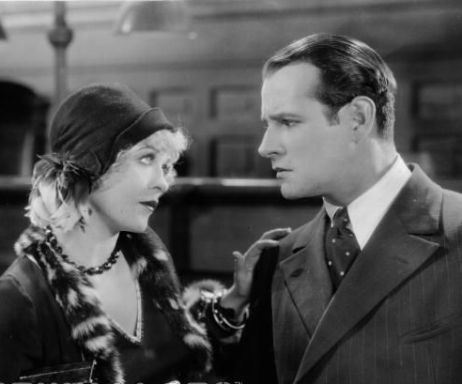 Flicker Alley's set also includes some genuinely fascinating bonuses, including a brief documentary on the real murder case the story is based on. A second disc includes the 1950 March of Time production The Golden Twenties, an excellent feature length documentary on the decade in question, as well as 1985's The Flapper Story, an even better film in which surviving Jazz Age babies explain What It All Meant (which turns out to be a lot more interesting than just the Charleston and bootleg gin).

In any case you can -- and I would say probably need to -- order Chicago over here.

And that said, and given that things will doubtless be a little quiet around here for the foreseeable future, here's a fun and obviously relevant little project for us all:

Best or Worst Feature Film With a Real Life City or Town in the Title!!!

Okay, I'm just being a wiseguy here, but cut me some slack -- it's a two-fer!

Hey -- I was going to nominate Last Year at Marienbad instead, but I figured this one was more than opaque and impenetrable enough.

Not a particularly good movie, but I'm inordinately fond of it anyway due to a hilarious true story about an encounter between star Ricardo Montalban and the somewhat fey gentleman who dubbed his voice in the English-language version.

The one and only, obviously.

And the Numero Uno  [fill in the blank is] My Kind of Town! movie simply absolutely positively has to be...

The plot: After the titular rock festival ends, a hippie-hating farmer (Tige Andrews, of The Mod Squad) goes all lycanthropic when he gets a massive jolt of electricity trying to destroy a leftover piece of equipment one of the bands left behind. I am not making any of this up, BTW.