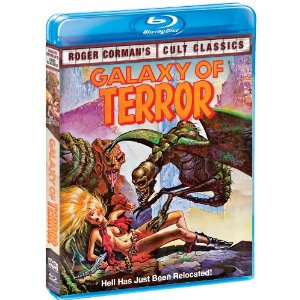 Video Event of the Week: Might Warner Home Video's DVD version of Cop Out, the action comedy featuring Bruce Willis and Tracy Morgan from director-for-hire Kevin Smith, be what we're talking about? Is Magnolia's Blu-ray of Mother, the family melodrama/mystery from The Host director Bong Joon-ho, conceivably in the running? Or is it possible that Sony's various disc versions of The Runaways, the 70s rock slice of life featuring Kristen Stewart as Joan Jett and the almost grown-up Dakota Fanning as Cherie Currie, just might be The One?

All worthy to be sure, especially The Runaways, which overcomes most of the usual band bio cliches thanks to a perceptive script and absolutely brilliant performances by the aforementioned Stewart and Fanning and -- particularly -- Michael Shannon as LA scenemaker/svengali Kim Fowley. Nevertheless, for my money, it's just got to be the latest entry in Shout! Factory's ongoing campaign to issue Blu-ray versions of every Roger Corman-produced piece of cheese ever made -- specifically, the wonderful 1981 sci-fi mishegass that is Galaxy of Terror. Featuring production design by none other than the young James Cameron -- years before he achieved fame as the director of The Worst Movie Ever Made©!

Oh, and the notorious worm rape scene, but let's move on to happier matters.

The plot, freely adapted from the Blu-ray box and various other sources:

The mind's innermost fears become reality for the crew members of The Quest when they land on the barren planet Morganthus hoping to find the crew members of the starship Remus -- only to discoverer something deadly waiting for them. Each member of the rescuing team -- mustachioed senior office Edward Albert, in-house empath Erin Moran, crusty-but-loveable cook Ray Walston, quiet (and thus probably doomed) crewman Robert Englund, and genre favorite Sid Haig as The Beaver -- must come face to face with their darkest fears or perish. I think Yoda was supposed to be in there too, but either he was busy or George Lucas threatened to sue.

GOT is generally dismissed as a blatant rip-off of Alien, which was probably Corman's idea going in, and it indeed nods to that film visually (in truth, though, it feels a little more like Mario Bava's Planet of the Vampires, the film that Alien blatantly ripped off, if we're going to get all meta about it). It also borrows its central plot gimmick from Andrei Tarkovsky's Solaris, although obviously (this being a Corman product, after all) it moves along at a considerably less glacial pace, and of course any film co-starring the former Joanie from Happy Days is operating on a somewhat different esthetic level. In any case, for what it is, GOT is done with tremendous straight-faced conviction, and the low-budget special effects are actually pretty effective most of the time. And by most of the time, we mean except for the aforementioned worm rape scene, in which actress Taaffe O'Connell is stripped and slimed by what appears to be a thousand pound rubber maggot which, as these things go, is slightly less convincing than the giant squid that polishes off Bela Lugosi in Bride of the Atom; as writer Jovanka Vuckovic notes in the helpful essay included with the set, if you look closely, it's apparent that O'Connell spends most of the scene trying her damndest not to laugh.

Here's a clip of an early scene to give you an idea of GOT's charmingly high school A/V department mise-en-scene.

That is, of course, the wonderful Grace Zabriskie -- Laura Palmer's mom on Twin Peaks -- as the ship's pilot (and by pilot, we mean clone of Sigourney Weaver).

GOT has been out of home video circulation for quite a while, so I'm pleased to report that Shout!Factory's high def transfer derives from a print in excellent condition and looks terrific. Bonuses with the set, which if you actually sat through them would take longer than the time needed to watch the film itself, are copious, as is usual with these Corman reissues; for those that care, you get an audio commentary by various cast and crew members, some filmed interviews with some of the actors, a making-of doc featuring film editor R.J. Kizer, a couple of theatrical trailers and the de rigeur still galleries. Best of the bunch is probably the PDF of the original screenplay, which I suspect might be helpful (either as an inspiration or a cautionary warning) to aspiring low-budget filmmakers.

In any case, you can -- and unless you're one of those soreheads with no love for 80s sci-fi sleaze, definitely should -- order it over here.

Okay, and with that out of the way, here's a fun and tangentially relevant  little project for us all:

Best or Worst Performance Big Screen Performance By an Actor Originally or Usually Associated With the Small Screen (i.e., Their Work on TV)!!!

Well, Garner in just about anything, obviously, but I think his take on Raymond Chandler's iconic detective hero is conspicuously underrated.

You know, for the life of me, I can't recall if I first saw this before or after I was totally taken with McQueen as the sawed-off shotgun toting bounty hunter on Wanted: Dead or Alive. Somehow I suspect it was after.

Not sure why this one was so roundly ignored back in the day -- perhaps subconscious resentment that anybody dared to remake the classic original, or maybe the public perception that Caruso had bolted from his role on NYPD Blue because he was too big for his britches. In any case, it's actually quite a good film, and Caruso holds the screen throughout.

2. Gillian Anderson in The House of Mirth (Terence Davies, 2000)

Venerable critic Stanley Kaufman famously dismissed Anderson's performance in this by saying it was obvious the director really wanted Julianne Moore and had to settle. To which I've always wanted to say, loudly and in public  -- Stanley Kaufman, bite me.

And the Numero Uno crossover from the Orthicon Tube performance of them all just has to be....

If only for the bedroom scene when Winkler's oboxious JAP girlfriend asks him "Am I fat?" and he replies, with just the perfect mixture of frustration and world weariness,  "You're a willow. You're Audrey Hepburn in The Nuns Story."