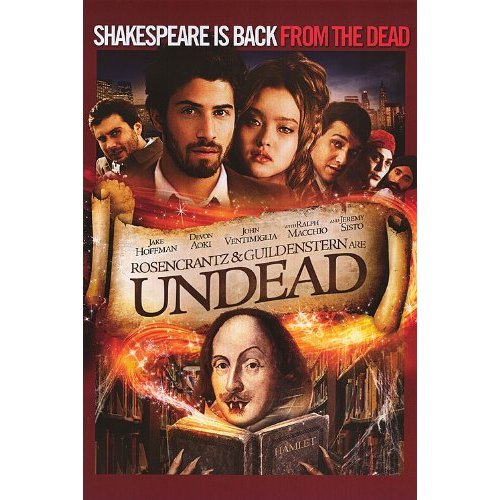 Okay, I realize it's a pretty shameless cash-in on the whole Pride and Prejudice With Zombies literary mashup thing, but still -- this is one of those great ideas you can't believe nobody thought of until now:

Ladies and gentlemen, are you ready for....wait for it...Rosencrantz and Guildenstern Are Undead?

The plot, freely adapted from the studio press release:

Living in the back room of his father's doctors office, broke, frustrated ladies man Julian (Jake Hoffman) scores his big break when he lands the job directing an off Broadway version of Hamlet. Except it's a bizarre adaptation written by a pale Romanian impresario named Theo (John Ventimiglia) who (in a gimmick borrowed from the 2000 Nosferatu pastiche Shadow of the Vampire) is an actual Dracula-ian bloodsucker. Theo hopes to lure the real Hamlet (Kris Lemche) out of hiding so the two can end a century's long feud over Shakespeare's Ophelia. Meanwhile, Julian pines for his ex-girlfriend, Anna (Devon Aoki) who is dating a mobster played by original Karate Kid Ralph Macchio. There's also a dimwitted cop played by Jeremy Sisto, some Da Vinci Code nods including the Holy Grail and the Rosicrucians, and Sean Lennon, of all people, wrote the score.

Here's the trailer to give you an even better idea.

Okay, as you may have guessed from the above by now, the film actually doesn't deliver on its premise, i.e., it's not, as one might hope, a straight zombie remake of the Tom Stoppard play. Instead, it looks like a rather more conventional, if still potentially amusing, olio of Buffy the Vampire Slayer and Dude Where's My Car. In any case, R&GAU is in limited release around the country as we speak; the DVD is scheduled for November, and I'll get back to you about it after I've seen it.