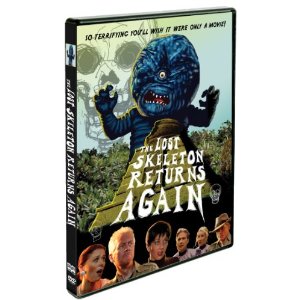 Video Event of the Week: Might we be talking about Touchstone's DVD package of The Last Song, the Nicholas Sparks weeper adapted as a dramatic vehicle for the increasingly irksome Miley Cyrus? Could Lionsgate's updated Blu-ray version of Francis Ford Coppola's brilliant The Conversation, the post-Watergate existential mystery starring Gene Hackman, by any chance get the nod? Or by any stretch of the imagination, is it possible that Showtime/Paramount's respective disc versions of Dexter: The Fourth Season, are conceivably The One(s)?

All worthy to be sure, and yes, although I had planned once again to talk about Kino's restored version of Pandora and the Flying Dutchman, my copy of this 1951 Technicolor phantasmagoria is still inexplicably lost in the mail. So, that being the case, the winner simply has to be Shout! Factory's DVD of The Lost Skeleton Returns Again, the long awaited (okay, perhaps that's overstating it) sequel to the 2004 cult fave sendup The Lost Skeleton of Cadavra from writer/director/actor Larry Blamire (a triple-threat filmmaker who presumably also swept the set after the day's shooting wrapped).

I should stipulate at this point that I generally have very little patience with with midnight movie wannabes, i.e., films that aspire to be deliberately crappy, as in Attack of the Killer Tomatoes (although I will admit that one at least had a snappy theme song). And if truth be told I wasn't all that nuts about the original Lost Skeleton, which was mostly an homage to worst film maker of all time Ed Wood's Plan 9 From Outer Space; Blamire's heart was clearly in the right place, and lord knows he had Wood's mangled visual and verbal syntax down to a tee, but it ultimately struck me as a little too knowingly campy. After all, the reason we still watch Wood's films is that as an auteur he was trying his damndest to something wonderful; it's our amazed realization of the scope of his failure that's gives works like Bride of the Atom their enduring charm.

This new one, however, which brings back most of the original cast and Blamire's trademark Mobius Strip Wood-ian dialogue, is a little more ambitious.  it's a pastiche not of just of Wood movies but also countless B jungle flicks and serials, and it's made me a reluctant convert;  I will admit to laughing at it,  convulsively (if you must know), just about throughout. Here's a clip to give you an idea; you'll note, by the way, that it's actually a fairly handsome looking film, which in a way is part of the joke.

I should also add (and I'm trying not to give anything away here) that although the black-and-white cinematography is (as noted) surprisingly good, there's a sort of visual nod to The Wizard of Oz in TLSRA that nudges the film into a whole 'nother level of inspiration; you'll know it when you see it. It's also worth mentioning that along with Blamire's stock company, most of whom have what are usually described as great faces for radio, familiar actual actor Daniel Roebuck (he played Jay Leno in HBO's The Late Shift) is on board here and seems to be having the time of his life.

Special features with the disc include the obligatory running audio commentary by various cast and crew members, plus a making-of doc; if you actually sit through the entirety of the former, I should (as is my wont) like to meet you some day, if not, perhaps, to shake your hand.

Bottom line: You can -- and I would say on balance might as well -- order The Lost Skeleton Returns Again over at Amazon here.

That said, and because things are doubtless going to be a tad quiet around here for a few days, here's a fun and theoretically relevant little project to help us wile away the hours:

Best (or Worst) Screen Parody of a Specific Film or Genre!!!

Huston sending up his own Maltese Falcon (and all the films of its ilk). 1953 audiences didn't quite get the joke, alas.

Rowan and Martin sending up Huston's The Maltese Falcon (and all the films of its ilk). 1969 audiences didn't get the joke either 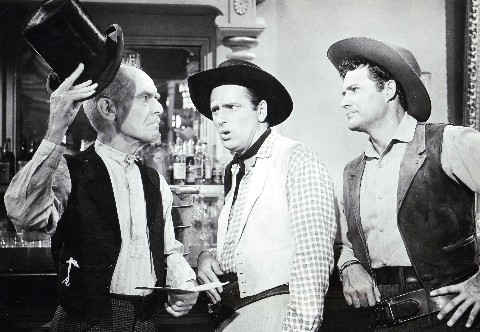 Rowan and Martin sending up the Western. Nobody has ever gotten the joke, although that's no excuse for the fact that it's never been available on home video.

Comic genius from stem to stern, with just about every Universal horror film trope rendered with equal parts affection and gentle ridicule.

And the Numero Uno genre inversion of them all, if you attempt to dispute this I will come to your house and berate you loudly, simply has to be... 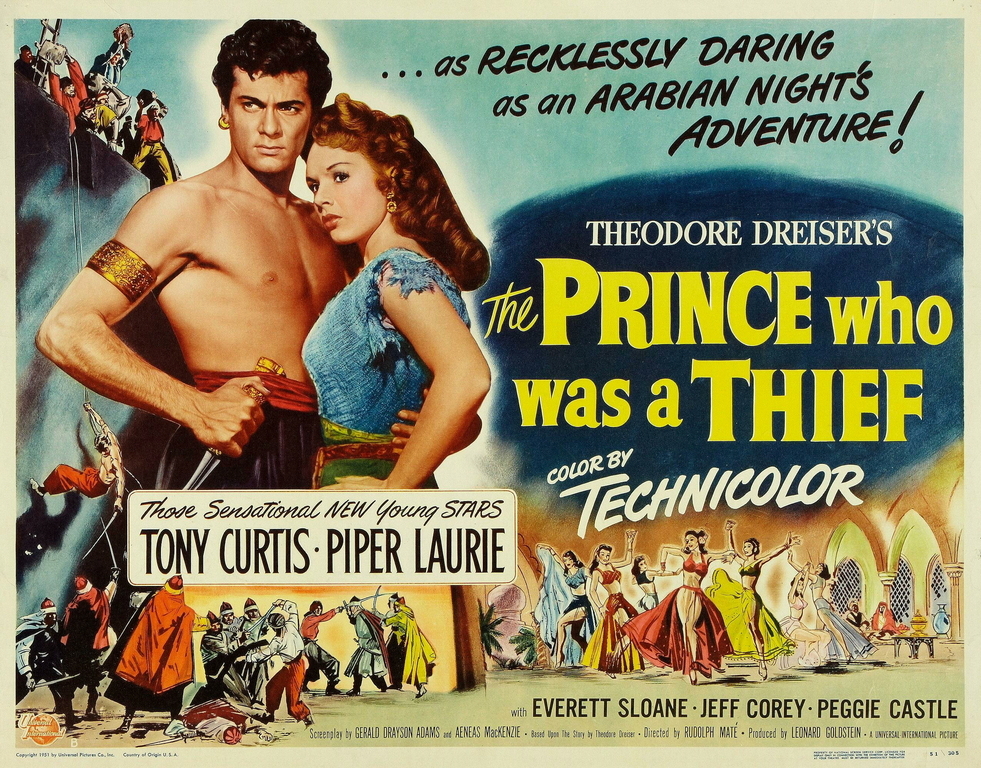 It plays like a take-off of a bad back-lot Arabian Nights adventure, although this was,  probably, intended straight. Probably. I haven't seen it in years, alas, and it's not on DVD or YouTube, so I can't say for sure, but depending on who you ask, it may or may not be the movie in which Tony Curtis utters the immortal line "Yonder lies the castle of my father." It IS, however, without question the movie in which the great Jeff Corey utters the should be immortal line "Son of a noseless mother! Maggot-brained child of a jackass!"