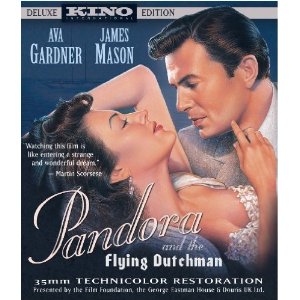 Video Event of the Week: Might ABC Studios Blu-ray version of Lost: The Complete Sixth and Final Season -- you know, the one where it turns out to be all a dream that Bob Newhart had? -- be what we're talking about? Could Anchor Bay's various disc editions of City Island, the endearingly noisy family farce starring Andy Garcia and Julianna Margulies, conceivably get the nod? Or might New Video Group's DVD of Yoo-Hoo Mrs. Goldberg, the fascinating 2009 documentary on the pioneering but now unjustly forgotten radio and tv auteur Gertrude Berg, by any chance be The One?

All worthy, to be sure, even that goddamned Lost set despite the fact the finale still steams my beans, but mirabile dictu -- I finally got the Kino Blu-ray of the restored (2009) version of writer/director Albert Lewin's phantasmagorical Technicolor fantasy Pandora and The Flying Dutchman (1951), starring James Mason and the drop-dead gorgeous young Ava Gardner. And all bets, as they say are off!!!

The plot (via that on-line encyclopedia with little credibility):

1930: Beautiful Pandora Reynolds (Gardner), who's fascinated by danger and destruction,  is the queen bee of a vaguely decadent group of Anglo-American expats in the small Spanish port of Esperanza. All the men love her (or think they do), but Pandora is completely self-involved and inevitably destroys her admirers, claiming that the measure of love is how much they are willing to sacrifice for her. One day, Dutch captain Hendrick van der Zee (Mason) arrives in Esperanza; Pandora swims out to his yacht, finds him painting a picture of her and almost instantly falls in love. It's not until near the end of the film, however, that she learns (as the audience already has) that Zee is the legendary Flying Dutchman, a sixteenth century noble who killed his supposedly unfaithful wife and was cursed to sail the seas for all eternity until he finds a woman who loves him enough to die for him. But Zee is unwilling to let Pandora do it all for love, and tries to provoke her into leaving; when she learns the truth, she swims out to his yacht once more to join him in a final liebestod. A fierce storm comes up, and the next morning the bodies of Pandora and the Dutchman wash up on shore. The curse has been broken.

There's lots more, including a love triangle involving a lady killer Spanish bullfighter and an equally arrogant Brit race car driver who both have designs on Pandora, but the above pretty much sums up the film's ungainly but strangely hypnotic mix of romance, surrealist glamour and supernatural melodrama. 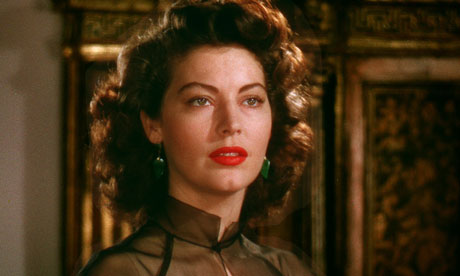 Writer/director Lewin's best-known film is probably the 1945 The Picture of Dorian Gray and PATFD shares some of the same virtues (the literary sensibility and the sure hand for the fantastic) and flaws (occasionally stilted dialogue, a reluctance to deal with obvious subtext). It is, however, an absolutely ravishing visual accomplishment, and if it reminds you of a Michael Powell film of the period, that's hardly an accident. In many ways, beginning with the story, it's Lewin's attempt to DO a Powell; the staggering Technicolor photography is by Powell stalwart Jack Cardiff, and Marius Goring, who plays the poor lovesick dope Pandora drives to suicide in the film's first act, is straight out of Powell's stock company in films like The Red Shoes and A Matter of Life and Death. Pandora comes across as a trifle leaden compared to those masterpieces, however, but in its own loopy way it's still a pretty great piece of work; Martin Scorsese has observed that watching it is like being immersed in a strange and wonderful dream, and that pretty much nails it. Plus, of course, the star chemistry between Mason and Gardner, whose animal sensuality was at its peak here, is almost overwhelming.

Kino's new Blu-ray version is from a 2009 restoration produced jointly by Scorsese's Film Foundation and George Eastman House, and while perhaps not the definitive upgrade, it mostly looks and sounds terrific. Here's Kino's official trailer -- which is included as an extra on the disc -- to give you an idea of just what the revamp accomplished.

Other generally interesting extras with the set include an alternate version of the opening sequence, a still gallery,  original trailers and El Torero de Córdoba, a fascinating 1947 Spanish documentary on legendary bullfighter Manolete.

Bottom line: You can -- and if you don't, you're frankly the poorer for it -- order Kino's restored Pandora and the Flying Dutchman over here.

And with that out of the way, and because things will doubtless be a little quiet around here for a few days, here's a fun and obviously relevant little project to help us wile away the hours:

Best, Worst or Just Interesting Use of Color in a Feature Film!!!

Monica Vitti pits the existential meaning of her legs against a bleak industrial landscape in perhaps the most gorgeously rendered apocalyptic vision in contemporary cinema. I'm not an Antonioni fan, generally (and I just looked at Zabriskie Point again and I still think its stoned revolutionary mishegass) but this one works on just about every level. IMHO. I should add that the recent Criterion DVD version, which I somehow forgot to review when it came out a few weeks ago, looks breathtaking and features some very cool bonuses, including archival interviews with both the director and the iconically toothsome Vitti. If you've got any disposable income, grab it immediately over at Amazon here.

For the breathtaking brief flash of the little girl in red in the otherwise completely black-and-white film. One of my least popular theories is that Spielberg actually inserted the shot as a relatively subtle fuck you! to the MCA executive who begged him to shoot an alternate color version of Schindler for the home video market. Honorable mention: William Castle's The Tingler, for the brief scene when it goes to color (the better to scare you with a bathtub full of blood).

The one and only. Please do not try to operate heavy machinery after watching.

I absolutely loathed -- make that LOATHED -- this admittedly influential proto-indie sci-fi cocaine chic version of La Boheme when it was new, but even so, I was also impressed by how effective its use of color was; the scummy Manhattan New Wave club milieu is so artfully rendered you can practically feel the disease germs growing beneath your feet.

And the Numero Uno Wonderful World of Color classic -- c'mon, why are we even arguing? -- just has to be...

In astoundingly unreal Cinecolor. Seriously. Cinecolor, which was a cheapo alternative  to Technicolor, helped make a lot of low budget genre flicks look even odder than they might have otherwise, but this one -- which features futuristic fashions by future Playboy pinup portraitist Alberto Vargas -- is still my favorite.