All worthy, without a doubt, but for my money it's the Criterion Collection's two disc set of Salò, the 1976 adaptation of the Marquis de Sade's notorious 120 Days of Sodom by writer/director Pier Paolo Pasolini.

To be sure, I am not as convinced as some -- including the various critics, Gary Indiana and Catherine Breillat among them, who contribute notes to the excellent illustrated booklet included with the set -- that the film is a masterpiece. Some years ago New Republic film writer Stanley Kauffman noted that at some point, you have to make a crucial decision about Sade -- is he a revolutionary genius or merely a talented pervert? I personally tend toward the latter idea, although I will admit that Sade's Justine is rather deadpan funny in a Candide-ish sort of way; for the most part, though, his work strikes me as the overwrought self-serving ravings of a guy with, at the least, really serious issues. On the basis of Salò, which updates the story from the 18th century to the waning days of Mussolini's fascist Italy, you could probably say the same for Pasolini. The simulated horrors here, which are astoundingly graphic for the time -- torture, rape, murder, mutilation, coprophilia -- seem a little too gleefully personal, and (as with Sade) the supposed philosophical, political and esthetic undergirding seems like rather bogus (cue the Church Lady's "How convenient!") justification for the fact that their author is frankly getting off on them. 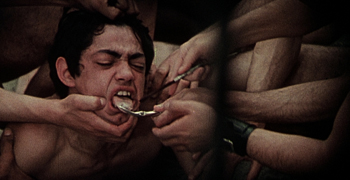 That said, there's no way around the notion that the film evokes a palpable feeling of nightmarish dread, as if one was encountering a distillation of pure evil; Pasolini, for all his demons, was probably more of an artist than his 18th century predecessor. Of course, something along those lines might describe a less pretentious (but equally transgressive) auteur like 60s gore pioneer Herschel Gordon Lewis, which is why I rather prefer watching Salò in the dubbed English language version Criterion includes along with the sub-titled Italian soundtrack; whoever the actors doing the English voices are, they're so community theater hammy that it makes the on-screen depravity easier to take, like the amateur emoting in Lewis's otherwise unwatchably appalling Blood Feast.

Whatever your take on Salò, however, it gets typically top shelf treatment by Criterion here. Disc one has a gorgeously sharp and detailed high-def letterboxed transfer of the uncut film, plus the original trailer. Disc two has three fascinating making-of documentaries (the first of which has interview footage of Pasolini, who was murdered, under shall we say Pasolini-esque circumstances, just after completing the film), as well as new interviews with production designer Dante Ferretti and film scholar Jean-Pierre Gorin. All in all, Les Fleurs de Mal have rarely had a more deluxe presentation; you can (and probably should) order the set here.

5. A Tale of Two Cities (Jack Conway, 1935)
Ronald Colman IS Sydney Carton in the role he was not only born to play but wanted to so much he was willing to shave off his trademark mustache to get.

4. Barry Lyndon (Stanley Kubrick, 1975)
"A remarkably accurate adaptation of Thackeray’s novel about the rise and fall of a duplicitous Irishman in eighteenth-century England. But by simply changing the point of view—turning the hero’s firstperson narration into a seemingly omniscient, though subtly fallible, third-person voice-over— Kubrick transformed a picaresque into a heartbreakingly ironic meditation on destiny." -- Bilge Ebiri, Bookforum.

3. The Heiress (William Wyler, 1949)
Henry James' Washington Square done to an absolute faretheewell. Great closing line: After barring the door to her her cad of a suitor, Olivia DeHaviland's aunt asks her how she can be so cruel, and she responds, "I have been taught by masters."

2. Catch-22 (Mike Nichols, 1970)
A book everyone assumed was unfilmmable, filmed brilliantly thanks in large measure to an all but perfect screenplay by Buck Henry. It would have been nice if they'd gotten Henry Fonda for the Major Major Major part, but you can't have everything

And the all time coolest cinematic translation of a great book, you gotta be kidding it's not even close so don't give me a hard time, obviously, is --