How Bad Could It Be?: Does Jerry Bruckheimer Know the Difference Betwen a Shi'ite and Shinola? 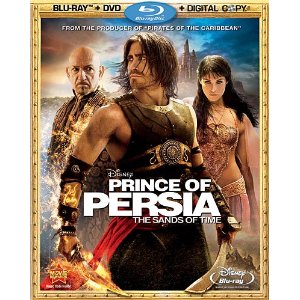 Well, I just got finished watching Disney's new Blu-ray/DVD combo-pack  version of Prince of Persia: Sands of Time, the rather transparent 2010 attempt at launching an Arabian Nights version of the Pirates of the Caribbean franchise with Jake Gyllenhaal as a road company Johnny Depp. I missed this one at my local Hell Megaplex earlier this year, probably because I've pretty much run out of patience with movies -- even relatively good ones -- based on crappy video games. But I've been a fan of Gyllenhaal since his turn as a seriously alienated teen in Donnie Darko, still the Citizen Kane of diabolical imaginary giant rabbit movies, and I'm an even bigger fan of his fetching co-star Gemma Arterton, who was so good as the designated offed-by-the-villain-before-the-end Bond Girl in the recent Quantum of Solace. Plus, the always reliable Ben Kingsley and Alfred Molina were in there as well, so I figured why not give it a look?

The plot (via the DVD disc box and the IMDB):

Adopted off the streets by Persian King Sharaman, young Dastan (Gyllenhaal) grows up amongst royalty and quickly earns his place as a mighty warrior and prince. As his jealous brothers Garsiv  and Tus plan battle strategies, a spy sends word that the Holy City of Alamut has been supplying weapons to enemies of the King. Taking matters into his own hands, Tus orders an attack on the sacred city and, when it falls, Dastan encounters the beautiful Princess Tamina (Arterton). Meanwhile, the old King dies under mysterious circumstances and Dastan is accused of his murder. He flees with the princess on a mission to clear his name, only to discover the real reason behind Alamut's treachery -- an evil mastermind's plot for ultimate power with a mystical weapon that can control the very fabric of time. Can Dastan and Tamina foil the scheme in time for Disney to merchandise the living daylights out of the movie and mount a sequel? All this and more, sayeth the sages, will be revealed. Oh joy.

Got that? If not, here's the trailer, which at least attempts to be somewhat coherent.

Anyway, the answer to our earlier question is "rather shockingly awful, but at least at this point we know it hasn't made our situation vis a vis the Islamic world any worse than it already is." Seriously, POP is shamelessly derivative (the opening sequence will remind you, simultaneously and unpleasantly, of the first Antonio Banderas Zorro and all the Brendan Fraser Mummys), visually ugly and utterly charmless; for all the gazillions producer Jerry Bruckheimer spent on it, the end product doesn't have a scintilla of the fun and visual appeal of an earlier era's piece of exotic cheese like the 1944 Jon Hall/Maria Motez Ali Baba and the Forty Thieves. Fortunately, the cast is mostly game; Kingsley hams it up rather entertainingly and Arterton is to die for, although Gyllenhaal looks uncomfortable, if truth be told. As for a future franchise, well, good luck with that, Jer. Both the DVD and Blu-ray versions are state of the art, however, and if you've got a decent home theater set up, they'll be pretty impressive demos (the Blu-ray looks incrementally more impressive). Bonuses on the Blu-ray include a sort of interactive video game interface with the film and a deleted scene, while the DVD has the obligatory making-of documentary.

That said, if you're reasonably starved for entertainment, you can pre-order Prince of Persia over here. And vaya con huevos to you if you do.