Image of the Day: Jeepers Creepers

The astonishing eyes of the great Eduardo Ciannelli, sinister Guru of the murderous cult of Kali, in Gunga Din (1939). 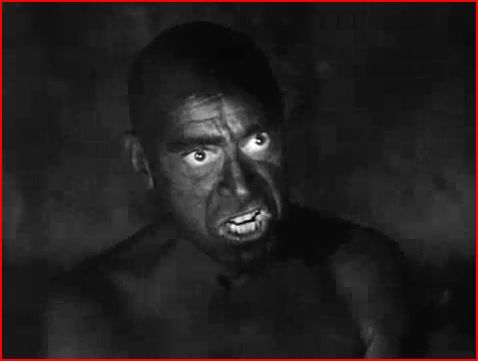 Ciannelli, an ex-opera singer at La Scala turned Hollywood contract player, had a long and astonishingly prolific career, mostly playing suave heavies in both movies and later television; he was just as at home in A pictures (a memorable turn as the gangster who makes life miserable for Bette Davis in Marked Women) as he was playing masked super villains in Republic serials (The Mysterious Dr. Satan). In Gunga Din, dressed more or less in a diaper, he scares the beejeebus out of the audience through sheer presence. Okay, and with some of the coolest dialogue ever (courtesy, among others, of Ben Hecht and an uncredited William Faulkner).

Consider this exchange between the Guru and his sort-of captor, Sgt. Archibald Cutter (Cary Grant):

Guru: Mad? Mad. Hannibal was mad, Caesar was mad, and Napoleon surely was the maddest of the lot. Ever since time began, they've called mad all the great soldiers in this world. Mad? We shall see what wisdom lies within my madness. For this is but the spring that precedes the flood. From here we roll on. From village to town. From town to mighty city. Ever mounting, ever widening, until at last my wave engulfs all India!

And then of course, a few moments later, as he exhorts his thuggee army --

Kill, lest you be killed yourselves.

Kill for the love of killing!

Kill for the love of Kali!!

Heh. Let's face it -- Hedley Lamarr only wished he could have given a speech like that.