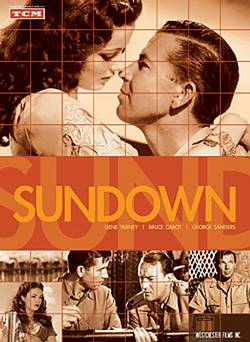 Caught an interesting (and until just now rather rarely seen) Gene Tierney flick over the weekend, a film making its DVD debut via the folks at Turner Classic Movies. I refer of course to the 1941 WWII curiosity Sundown, directed by Henry Hathaway.

And by curiosity, I mean a peculiar mishmash of genres, and even that doesn't quite get it exactly.

The plot (via the DVD box and some other sources I'd rather not divulge):

In an isolated British desert outpost in East Africa, the district commissioner (Bruce Cabot, whose lack of a Brit accent is explained by his being Canadian) and a British army officer (George Sanders, at his snootily supercilious best) are trying to unravel a Nazi plot to arm hostile local tribesmen with sub-machine guns. When a mysterious Egyptian/French woman named Zia (Tierney) arrives at the fort with her caravan of traders, an attack by the heavily armed natives has deadly consequences, and Zia is suspected of being a German spy. But she agrees to help the British by cozying up to a Nazi commander (Carl Esmond) and getting him to reveal his secret plans. Is Zia who she seems? Is the film going to end in a double cross or a triple cross? And does Anglican Bishop Sir Cedric Hardwicke's tacked on patriotic sermon at the end of the film really go on for an hour or does it just feel like it? Why are you asking me? Who am I -- Kreskin?

What that synopsis doesn't really convey is that Sundown, while consistently suspenseful and engrossing, can't seem to make up its mind just what it's up to. At first, the film seems like one of those whiskey soaked down-at-the-heels Brits-going-native epics like White Cargo, until you realize it's actually a sunbaked desert war-time espionage thriller a la Billy Wilder Five Graves to Cairo (with a dollop of Bogart's Sahara thrown in just for the hell of it). And then, of course, Tierney shows up in a harem costume and the whole thing begins to play like a black-and-white version of a Maria Montez camp fest like Ali Baba and the Forty Thieves. Plus, Joseph Calleia chews the scenery as an Italian POW who when he isn't cooking dinner for everybody delivers deadly serious monologues about the Nazi's secret plan to conquer the world without recourse to sea power. And if you blink, you'll miss two early performances by future action icon Woody Strode and the beautiful Dorothy Dandridge.

Here's the first reel, including our initial glimpse of Tierney, to give you an idea what I've been talking about (TCM's print and transfer are much better, by the way).

As you can see, it's a very handsome film -- California and New Mexico locations subbing (with the help of some canny matte paintings) quite convincingly for Kenya -- and Charles Lang's elegant black-and-white cinematography garned (deservedly) an Oscar nomination, as did the interesting early Miklos Rosza musical score. And of course, Tierney is just drop dead gorgeous; I'm not sure she was ever a great actress, but her natural aloofness serves her in good stead as the mystery woman here, and when she's onscreen you certainly can't take your eyes off of her.

In any case, Turner's DVD transfer looks terrific, and the package includes some interesting bonus stuff, including the proverbial plethora of production stills, posters and lobby cards; you can order it directly from the TCM website over here.