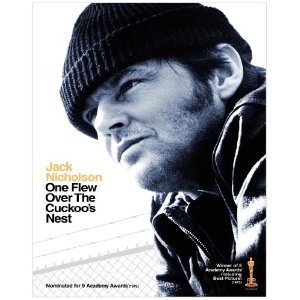 Video Event of the Week: Might Sony's DVD of The Secret in Their Eyes, Juan Jose Campanella's Oscar-winning and slightly over the top political thriller set in 70s Argentina be what we're talking about? Could Warner Home Video's Blu-ray update of the mother of all 50s sci-fi flicks, Forbidden Planet, conceivably get the nod? Or -- and how weird would this be -- could Dream Works' American Beauty, the Sam Mendes suburbia satire making its Blu-ray debut, by any chance actually be The One?

All worthy, to be sure -- except for American Beauty, a film that I dislike on a continuum somewhere between "complete loathing" and "I want to find Sam Mendes and smack him upside the head with a dead mackerel" -- but for my money, it has to be WHV's deluxe box set 35th Anniversary Edition of Milos Forman's great adaptation of the Ken Kesey novel One Flew Over the Cuckoo's Nest. With an iconic performance by some very cool guy named Jack something or other.

I need to stipulate here, up front, that I'm giving the Cuckoo's Nest set the nod not because of the film, per se, although it is, to be sure, a pop masterpiece; when people talk about the 70s as a sort of Golden Age, when deeply personal statements could somehow be made in the context of commercial American studio films, Cuckoo's Nest is one of the first pictures that comes to mind. Seeing it again this week, I was actually struck by how undated it seems, both in terms of technique and the counter-cultural baggage it might have been expected to drag with it into the present. It's actually rather a timeless story, as it turns out, and of course the ensemble playing -- not just by Nicholson, but also by a lot of then unfamiliar faces including Christopher Lloyd, Danny DeVito and Brad Dourif -- is beyond remarkable.

Here's the trailer (a cleaner looking version of which is included in the new set) for a taste, in case you've forgotten just how good the film is.

Cuckoo's Nest's intrinsic merits notwithstanding, I'm giving the anniversary box set the nod because of one simple word: Tschotchkes. For your money (approximately 50 bucks for the Blu-ray and 40 for the DVD) you get a repackaged version of the 2008 remaster, with its occasionally ravishing (although not high-def) transfer and first-time Surround Sound mix (which remains underwhelming). Bonuses (on a second disc) recycled from the aforementioned 2008 set include a pretty good making-of doc, the aforementioned trailer, some deleted scenes and an audio commentary by Forman and producer Michael Douglas; there's also a new interview with Douglas which is of interest for obvious reasons having little to do with the film itself. Oh yes, and those tschotchkes, by which I mean the stuff that turns this into a coffee table event: An elegant little book on the history of the film by critic Charles Kiselyak, an official looking manila envelope (with color shots of the cast inside) simulating a mental hospital's patient files, and -- best of all -- a deck of cards with more photos of the cast appended. As in these guys aren't playing with a full deck. Heh.

In any case, the whole thing is a handsome (and obviously suitable for holiday gift-giving) package with a really great film inside. You can -- and if you have a little disposable income, probably should -- order it over at Amazon right here.

Okay, that said, and because things as per usual will doubtless be a little quiet around here for a few days, here's a fun and obviously relevant little project to help us wile away the hours until Monday:

Best or Worst Feature Film Adaptation of a Serious and Well-Regarded Contemporary Novel!!!

I wasn't as enthused as some about the Cormac Mccarthy novel, which was way too relentlessly despairing even for a gloomy gus like me, but it was, inarguably, quite gorgeously written. The film version, on the other hand, while well-intentioned and visually impressive, came off like a zombie movie without the zombies.

Like Jon Cusack in High Fidelity, I read the Garcia-Marquez novel, but unlike him I am not completely sure I understood it. The film seemed to capture it to the limit of my own comprehension, however, and I thought Javier Bardem was aces 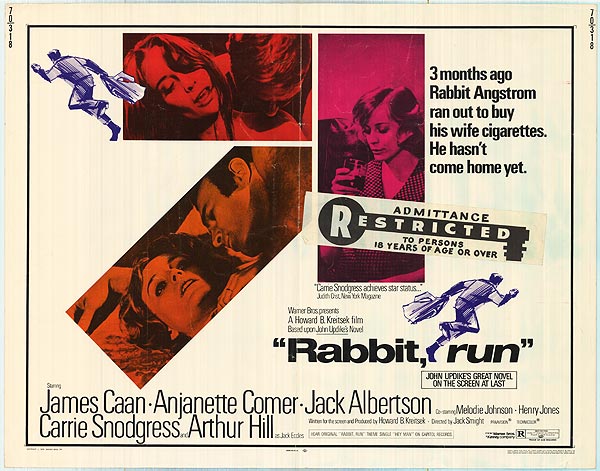 The Updike novel, of course, rendered as a vehicle for the young James Caan. It's supposed to be pretty good (Carrie Snodgrass's performance especially) but nobody I know, including me, has ever seen it. It just got released as a Warner Archive limited edition DVD, however, so it might be worth ordering over at Amazon. I'll get back to you on this one.

They said the book was unfilmable. They were wrong. Of course, who "they" were -- I suspect TV's Van Patten family -- is a subject for further research.

A complete disaster pretty much from the opening frame, or at least the first establishing shot of Bruce Willis as a character that author Tom Wolfe had written, deliberately, as a Brit. Just an amazingly bad film; at some point, you can't help thinking that it was made for no other reason than to deliberately annoy the millions of people who had read Wolfe's novel and loved it.