Weekend Cinema Listomania (Special What Were They Thinking? Edition) 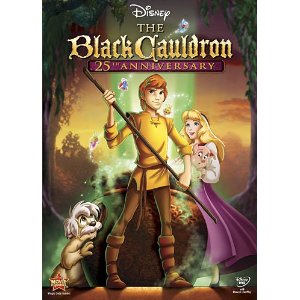 Video Event of the Week: Might Summit Entertainment's DVD of Letters to Juliet, the (as they say) by the book romantic comedy starring the annoyingly perky Amanda Seyfried and the (one assumes) picking up a check Vanessa Redgrave by any chance be what we're talking about? Could the Fox Blu-ray edition of Just Wright, yet another forgettable Queen Latifah vehicle (although this one makes up for it by co-starring the incomparable Pam Grier), conceivably get the nod? Or -- and against all the odds -- is it possible that Shout! Factory's various disc versions of Roger Corman's sci-fi 70s schlocker Starcrash is(are) actually The One(s)?

Could be, could be, and I'll have something to say about the Corman next week (short version: It's crap and it's fabulous), but for my money it's got to be Disney's 25th Anniversary reissue of the historically interesting animated fantasy The Black Cauldron.

Set a long time ago in a sort of generic pre-Industrial Age feudal kingdom, Cauldron is the story of a young boy and a bunch of misfit friends who embark on a quest to find the titular whatsit, i.e., a magic item of ultimate power, before the diabolical Horned King can get his claws on it and rule the world etc. Sound familiar? Well, of course, but this was two decades before Peter Jackson got around to adapting The Lord of the Rings, and who knows how things would have turned out if the Disney creative team had actually made the dark adventure that seems to be lurking within the frames of the PG product they settled for.  In fact, this was the first Disney film to get a PG rating; it was also Disney's first attempt at combining CGI with traditional animation and in 1985 it was -- at a production price tag of 25 million -- the most expensive animated film that had ever been made. Most crucially, it was also Disney's first feature length cartoon without songs or musical numbers.

Here's a clip to give you a taste of the look and feel of the thing.

As you can see, Cauldron still seems aimed at a traditional kiddie audience, rather than sword and sorcery fans; there's a lot of broad comic relief featuring Disney's de rigeur adorable critters, and the animation, while moderately impressive in spots -- the Skeletor-ish Horned King's first big scene has a sort of creepy grandeur reminiscent of the "Night on Bald Mountain" sequence in Fantasia -- is mostly pedestrian, and the whole thing plays a bit tentative and half-hearted. Not surprisingly, TBC died at the box office when originally released, and its failure spooked Disney from attempting another non-musical animated feature for years.

Like I said -- historically interesting, if not necessarily essential viewing. The good news is that the DVD transfer looks absolutely pristine, and the 5.1 surround track sounds great (the better to hear one of Elmer Bernstein's lesser known but still flavorsome musical scores). Bonuses with the disc include a not particularly challenging interactive game based on the film and Trick or Treat, a typically handsome 1952 Donald Duck short.

And yes, you can order it Amazon over here.

Okay, and with that out of the way (and because things will no doubt be a little quiet around here until Monday, here's a fun and obviously relevant little project to help us wile away those wayward hours:

Spacey got a lot of guff (unfairly, IMHO) for even wanting to do a bio-pic on Bobby Darin, a performer who in fact deserved such a film, unfashionable as it may have been to suggest. The final product's better than its rep, although Spacey (obviously too old for the part) comes off a bit like a Vegas tribute act.

MGM's not unfathomable (at least on paper) attempt to create another Gone With the Wind phenomenon. It's handsomely mounted, and it has its moments (especially when the young DeForest Kelley is onscreen) but unfortunately, Elizabeth Taylor isn't Vivien Leigh.

Barbra Streisand as a homicidal, possibly schizophrenic hooker. Calling this a vanity project doesn't really do it justice, although I believe Michael Musto gave it the perfect one word review -- "Mentl."

And the Numero Uno Doctor-You've-Got-to-Be Kidding! film production of all time simply has to....

A great director coming off a big hit (Deliverance) finally has the commercial clout to make a deeply personal dream project, and what he comes up with is...a piece of incomprehensible sci-fi mishegass featuring Sean Connery in a loincloth and one of the lamest Big Reveals in screen history. Said it before and I'll say it again -- I would have killed to have been at the pitch meeting for this.