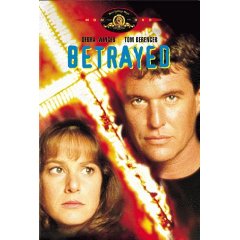 And speaking as we were
yesterday about a film in the Costa-Gavras ouevre that, shall we say, doesn't hold up, I still think Betrayed (1988) is one of the most reprehensibly silly couple of hours ever perpetrated by a major filmmaker.

In case you haven't seen it, this is the one where everybody's favorite nice Jewish girl Debra Winger plays an FBI agent (already a stretch) assigned to investigate the murder of a liberal Jewish talk radio guy (based on the real-life killing of Denver jock Alan Berg). She sets out to infiltrate a rural town suspected of harbouring those responsible, and after receiving a warm welcome from a farmer played by the too obviously likeable Tom Berenger, she not only begins to believe that the FBI lead is bogus but actually falls in love with the guy and marries him. Eventually, of course, she learns that he's in fact a member of The Turner Diaries bookclub and the leader of a white supremacist group involved in heinous acts of violence. At which point she's forced to choose -- betray the murderous monster she's been boinking or keep enjoying the cook-outs on the farm.

Here's a clip, featuring John Mahoney as yet another Avuncular Nazi Next Door type, to give you an idea.

This is all utterly preposterous, of course, and to my mind, the "Crazy racist anti-semite motherf***kers are people, too" ethical dilemma the film posits is...oh, what's the word I'm groping for?...offensive? Preposterous and offensive, of course, are screenwriter Joe Eszterhas' stock in trade, so perhaps it's silly of me to have expected otherwise from the auteur of such sleaze-fests masquerading as social comment as Basic Instinct, Showgirls and Sliver. In any case, Joe certainly has a way with dialogue: "Lyle thinks 'Have a nice day!' is a Jewish plot to put us all to sleep" is clearly right up there with "Frankly, my dear, I don't give a damn."

In any case, if you think I'm making any of this up you can actually order Betrayed over here, although it's quite possible that you won't thank me if you do.