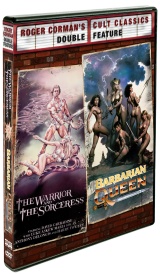 Some days, I really love this gig, and today as it turns out is one of them. Because what's just crossed my desk is the latest in Shout! Factory's series of Roger Corman reissues, and unlike last week's entry (the cockamamie George Lucas rip-off Starcrash), this one I really dig the most.

I refer, of course, to the newly restored edition of writer/director John C. Broderick's wonderful no-budget 1984 fantasy adventure The Warrior and the Sorceress.

I've written about this film before, principally on the occasion of star David Carradine's untimely death back in June of '09, and it remains, for a number of reasons, one of my favorites amongst his ouevre.

Itinerant intergalactic warrior Kain (Carradine) crosses the barren wastelands of the planet Ura in search of gainful employment. He arrives at a remote village where two arch enemies, Zeg and the evil degenerate Balcaz, fight incessantly for control of the town's only well, just about the only thing of real value for thousands of miles. Kain, having nothing better to do, decides to bring down both tyrants, and alternates selling his services to whichever one amuses him at the time. The resultant internecine warfare results in mucho severed limbs; eventually Kain gets the mercenaries on both sides of the conflict to off each other and peace is restored to the now considerably less population dense village.

As you've doubtless gleaned by now, this is in fact a space opera rewrite of the Sergio Leone-directed Clint Eastwood vehicle A Fistful of Dollars, the spaghetti western classic that was itself a remake of Akira Kurosawa's samurai masterpiece Yojimbo. I should also add that it is conspicuously bereft of any character corresponding to the titular sorceress; apparently, producer Corman demanded the title change on the theory that the promise of a hot supernatural babe might be an audience draw.

In any case, despite the essentially Z-picture production values (the budget was $80,000, which even back then was pretty paltry) Broderick invests the whole thing with enormous conviction and Carradine's just great; whatever mishegass is going on around him, he holds the screen in every scene he's in.

Here's the trailer, to give you an idea of the film's surprisingly effective mise-en-scene. Ignore the stuff about the sorceress, of course.

Shout! Factory's new widescreen transfer looks better than any video version I've seen in the past (not saying much, alas -- it's beginning to seem like whoever supervises Corman's film vaults spends most of his time drinking) and the movie's paired with a decent print of Barbarian Queen, another Corman sword and sorcery drive-in entry, which isn't quite as entertaining but deserves numerous points for the presence of the toothsome Lana Clarkson in the title role.

In any case, I bring all this up because WATS writer/director Broderick was earlier involved with a film that's become the most confusing and inaccurately documented item in Robert De Niro's résumé -- The Swap a/k/a Line of Fire. And after some time-consuming and fairly expensive research (mostly phone calls to L.A., during which I was often put on hold) by moi, I am here at last to set the record straight.

Our story begins with Sam's Song, a low-budget but artsy 1969 study of soulless rich folks committing adultery in the Hamptons, which was one of the first releases of the then fledgling Cannon Films. it starred the very young De Niro (in his first significant film appearance) as an idealistic aspiring moviemaker who gets to witness the angsty goings-on amongst the yacht club set; Jennifer Warren (later familiar from countless TV appearances, as well as films like Slap Shot and Ice Castles) plays his ultimately suicidal sister-in-law. Written and directed by Jordan Leondopoulos, who subsequently worked as an editor on The Exorcist, it was a handsomely made, if occasionally pretentious and slow moving, little film; De Niro's only moderately interesting in it, if truth be told, and ultimately it made barely a splash.

Cut to: 1979, when the Golan/Globus team who had taken over Cannon and made it briefly an industry powerhouse, remembered that they had a De Niro film in their vault, De Niro of course now being a huge star. G&G hired Broderick to write and direct, on the cheap, a new, and hopefully more commercial, film utilizing the 1969 footage. Broderick came up with a fairly standard for the day Mafia sleazeball revenge fantasy -- in his verson, De Niro's character has been murdered over footage for a porno film, and his just released from prison brother goes off to track down his killer. Shot in about ten days -- with future 80s scream queen Sybil Danning as an unconvincing stand-in for Warren -- the film limped in and out of grind house theaters as The Swap; direction was officially credited to John Shade, a nom du cinema Broderick took from the name of a character in Nabokov's Pale Fire.

In any case, over the years Broderick and Leondopoulos have been constantly mis-identified as each other in various on-line movie databases and filmographys. So I would like to state now, and for the record, that they are, in fact, two different people; I know, because I tracked both of them down for interviews in 1997. Broderick was very funny and self-deprecating about the experience, and he wasn't shy about telling me he thought that Sam's Song was basically faux Antonioni. Leondopolous, for his part, was still obviously miffed -- with good reason -- about what the philistines at Cannon had done to a serious piece of work.

I should add that Broderick -- the real one -- died in 2001; famed album cover and comic book artist William Stout, who co-wrote the screenplay for The Warrior and the Sorceress, has some interesting stuff to say about the late auteur and the experience of the project over here. Over the last few weeks, I've tried to track down Leondopoulos again, but nobody -- including original Sam's Song editor Arline Garson or composer (and electronic music pioneer) Gershon Kingsley, who graciously spent time on the phone recalling the project for me -- seems to know what's become of him; if anybody reading these poor words has any idea, I'd love to hear from you.

Incidentally, up until very recently, it was very hard to find decent video releases of either version of the De Niro film, but I was delighted to discover that both of them, in their entirety and in very serviceable prints, are now available for viewing and (apparently free and legal) downloading over at the inestimable Internet Archive. Click here for Sam's Song; when you're done watching it, click here for The Swap.

As for The Warrior and the Sorceress, which goes on sale on the 19th, you can pre-order it at the Shout! Factory website over here.