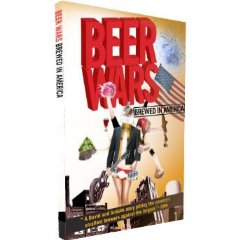 Video Event of the Week: Is Warner Home Video's deluxe 70th Anniversary box-set Blu-ray edition of The Wizard of Oz (I've never seen it, but I hear it's a musical) perhaps a contender? Might Shout! Factory's The Patty Duke Show: Season One, featuring all 26 episodes of the 60s sitcom about some weird girl who loses control over a hotdog, conceivably make the cut? Or against every norm of decent civilized society, would Image's Blu-ray and DVD versions of Management, the 2008 Steve Zahn/Jennifer Aniston romantic comedy that slipped under most people's radar in theaters, possibly be The One?

All worthy, to be sure, and that last one is actually a sleeper worth checking out. But for my money it's got to be Ducks in a Row Entertainment's DVD of Beer Wars: Brewed in America, an eye-opening, funny and righteously infuriating documentary by first-time filmmaker Anat Baron.

Baron was the former general manager for Mike's Hard Lemonade (sort of the Bartles and Jaymes or Zima of the new century) so she obviously knows a little something about the spirits biz, and her film (think of it as Suds: A Love Story) is a sort of Michael Moore-ish look at how three gigantic corporate entities -- Anheuser/Busch, Miller and Coors -- not only sell a demonstrably crappy product but use their enormous monopolistic clout to squeeze out smaller entrepreneurs who try to challenge their hegemony. It's your basic David and Goliath story (told through the eyes of two of the aforementioned small entrepreneurs) with Baron as its peripatetic narrator and conscience, and while it's a tad heavy-handed at times it's also a pretty damning indictment of not just the beer industry but contemporary unfettered unregulated capitalism's disturbing excesses. Given our current economic climate (not to mention the health care debate -- the beer companies will definitely remind you of some of the current players in that little brouhaha) this is a film with all sorts of resonances beyond its immediate subject.

Here's the trailer to give you an idea of its at times cheerfully bemused agit-prop approach.

Bottom line: One of the better recent examples of its genre; you can -- and I think absolutely should -- order Beer Wars here.

Okay, with that out of the way, and since things are likey to be little quiet around here for a few days, here's a relevant and hopefully fun little project for us all:

James Whitmore in blackface as a white journalist going underground to pass as an African-American in the early-Civil Rights era. Based on a true story, astoundingly enough, but words fail me about the film. 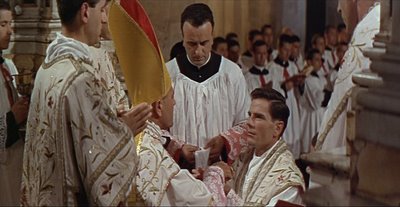 Not the first film, historically, to deal with abortion, but the first big studio star vehicle to do so that impinged on my consciousness. Actually, in 1963 I had barely even heard of abortion, but watching this film in the darkened vastness of the Hackensack Oritani Theater, I remember thinking "They're going to save a baby and let the mother die as a result? That's just not right!"

Monstrous ex-GI Robert Ryan murders nebbishy Sam Levene for no other reason than the poor guy's Jewish. Film noir, obviously, but also a surprisingly frank -- especially compared with Gentlemen's Agreement , which came out in the same year -- light shined on post-war anti-Semitism. Interesting historical note: The victim in the source novel was gay, not one of my co-religionists.

Everything in this movie is absolutely true. Especially the stuff about marijuana making you dance really weirdly.

And the numero uno ripped-from-the-headlines/if you want to send a message call Western Union flick unquestionably is...

Based on yet another true story, and perhaps the most riveting of Warner Bros.' pre-Code social issue thrillers. The closing line -- a haunted, hunted Paul Muni hissing "I steal!" -- still packs an enormous wallop some seventy odd years later.

Tags: The Wizard of Oz, The Patty Duke Show: Season One, Management, Steve Zahn, Jennifer Aniston, Beer Wars: Brewed in America, Black Like Me, The Cardinal, Crossfire, Reefer Madness, I am a Fugitive From a Chain Gang
Print