Weekend Cinema Listomania (Special It's All About the Music, Man! Edition) 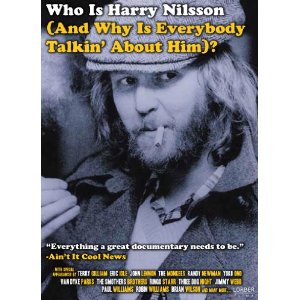 Video Event of the Week: Might the Criterion Collection's Blu-ray version of a new high-def transfer of Wes Anderson's thoroughly charming sort of road movie The Darjeeling Limited be what we're talking about? Could Magnolia's DVD of I am Love, the homage to 50s melodramas starring Tilda Swinton as an industrialist's adulterous wife, by any chance make the grade? Or, and I suppose this is at least theoretically possible, is there actually a chance that Dream Works' various 2D disc editions of How to Train Your Dragon, the better animated than the plot required 3D kid flick, by any chance be The One(s)?

All worthy for a change, as it turns out,, but for my money it's pretty much got to be Lorber Films new disc of Who Is Harry Nilsson (And Why Is Everybody Talkin' About Him)?, director John Scheinfeld's splendid new documentary about the life and career of one of the more spectacular flameout musical icons of the 70s.

I reviewed the theatrical version of this back in September, and in retrospect -- and after having watched it again at home -- I think I rather underrated it (a sometime occupational hazard when you're working a deadline, if truth be told). Yes, the film can't avoid the occasional Behind the Music cliches, and some of the onscreen talking heads that knew -- or more to the point, enabled -- Harry have their own agendas, but Scheinfeld gets to the heart of the guy in ways I hadn't initially noticed; I went into the film basically agnostic about the man and his music, but I came out a fan. It helps, of course, that the director had access to audio tapes Nilsson was making as notes for a projected autobiography; there are long (and fascinating) sections of the doc where the narrative is literally in Nilsson's voice, and it turns out he was as gifted a raconteur as he was a musician. And then, of course, there's that sequence from the making of the Son of Schmilsson album in which Harry gets a bunch of British geezers from a rest home to sing along on a tune whose endlessly repeated chorus goes "I'd rather be dead than wet my bed." As I said in my review, it's an act of wanton cruelty and by the end really painful to watch, but I still laughed harder at it than at almost anything else I've seem in a movie this year.

Lorber's DVD version of the film comes with about 90 minutes of bonus features, mostly deleted scenes, but there's also a music video for "Loneliness" that didn't make the final cut, and a new introduction by Yoko Ono, whose late husband, of course, featured as the co-star in one of Harry's most notorious drunken escapades (the stuff of pop legend, actually).

In any case, Who is Harry Nilsson (And Why Is Everybody Talkin' About Him)? is one of the most entertaining and rewarding things of its kind I've seen in many a moon; you can -- and I think you'll thank me if you do -- pre-order it over at Amazon here

Okay, and with that out of the way, and because as is customary around here, things will be quiet as the tomb over the weekend, here's a fun and clearly relevant little project to help us wile away the hours:

One sort of arbitrary rule here -- straight concert films need not apply. Although I'm willing to discuss same on a case by case basis.

A fascinating look at one of pop's most interesting recluses. And, as I said in my review at the time, also the absolute best documentary ever made about a guy who went into a studio to record the sound of a man punching a side of pork.

Not a very pleasant movie to watch, but against the odds -- and most likely unbeknownst to Madonna herself -- it does illuminate the rather sad empty nothingness at Ms. Ciccone's core. The Material Girl's then boyfriend, Warren Beatty, has the best line: ""She doesn't want to live off-camera, much less talk... What point is there of existing off-camera?"

Jason Priestly -- yeah, that guy -- directs (quite brilliantly, in spots) a little noticed tour documentary featuring the titular Barenaked Ladies. Some of the music's pretty good -- although that goofy white boy rap number made me want to fly to Canada and slap every one of these guys silly -- but in the end, it's the closest thing to a real life This is Spinal Tap I've ever seen. Not meant as a compliment, BTW.

And the Numero Uno pop musical tranche de vie, as the French say, simply has to be ---

Before during and after the calamitous Rolling Stones concert at Altamont; metaphors for the end of the end of the 60s party don't come any neater. Best moment: the helicopter flying away in the finale, and I will go to my grave insisting it's meant as a darkly ironic homage to the similar scene at the end of A Hard Day's Night.