Weekend (Sort of a) Cinema Listomania: Special No Matter Who You Vote For, The Goverment Always Gets In Edition 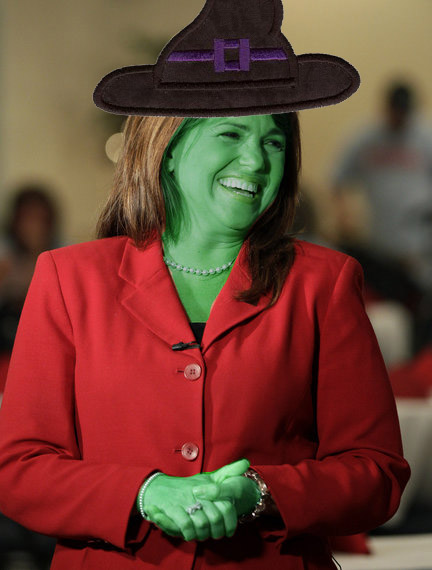 No Video Event of the Week this week, alas; as you may have guessed, I'm still recovering from a bout of jet lag associated with my recent excellent Parisian adventure. But have no fear -- The Event will return next week, in its usual tanned, rested and ready mode. And I'll have had a chance to catch up on several stacks of DVDs and Blu-rays I've been meaning to get to, including that fabulous TCM Douglas Sirk box set.

But in the meantime, in honor of Tuesday's primary elections, and given that a) things will per usual be a little quiet around here for a couple of days and b) this has been (depending on your perspective) either the most depressingly hilarious or hilariously depressing political season in memory (and as you know, I'm old enough to recall when people cast their votes by marking cuneiform tablets), herewith a fun and obviously relevant little project to help us wile away the hours:

No arbitrary rules this time out, you're welcome very much, except I'm talking about local, state and national government here. So if you nominate, say, something about high school student council politics (i.e., Election) I will come to your house and cast a patented Christine O'Donnell spell rendering you impotent and warty, okay?

Okay. And my totally top of my head Top Five is: 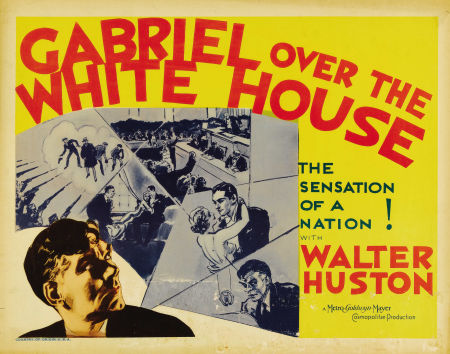 An American president (Walter Huston) who everybody thinks is a crook and a hack, a la Warren G. Harding, is possessed by -- the Devil? God? The weird demon in Exorcist II: The Heretic? -- and suspends that pesky Constitution, thereby saving America (and the world) from the Great Depression. Without question, the most confusing fantasy film of Hollywood's Golden Age; essentially, it can be read as a metaphor for anything.

From the Gore Vidal play, with Henry Fonda and Cliff Robertson as rival presidential candidates based on Adlai Stevenson and J.F.K. Still the best thing of its kind ever made, and Lee Tracy has the role of a lifetime as a wise but cynical political vet whose advice both rivals covet.

A sober, fair-minded, even sympathetic bio-pic portrait of the last president; I actually found myself empathizing with the big galoot despite my politics. Of course, Leni Riefenstahl made Hitler look kind of cute in Triumph of the Will, so perhaps Stone's humanizing of W. isn't that remarkable an accomplishment. In any case, thanks a lot, Ollie; what the hell were you thinking?

The explicit theme of the Richard Condon novel this is based on couldn't be clearer: The red-baiting antics of Sen. Joe McCarthy and his ilk did more to undermine American democracy than anything dreamed of by the actual Communist Conspirators in our midst. Frankenheimer's film version, largely faithful to Condon's angry pulp vision, adds a degree of sophistication about the role of the mass media to the mix, plus the best damned paranoid conspiracy plot of all time.  Still relevant after all these years, alas.

And the Numero Uno big screen treatment of the bizarre Kabuki Theater that passes for American Democracy in the early days of the 21st century quite clearly is....

Two cops (Kyle McLachlan and Michael Nouri) chase an alien slug, who can enter and leave host bodies at will, across Los Angeles. As I may have mentioned previously in these pages, this is without doubt the Citizen Kane of alien body-shifting slug movies; what I may not have mentioned is that the final body the alien possesses is that of a Senator with a shot at the White House, thus upping the ante on The Manchurian Candidate.