Did You Hear the One About the Gay Zombie? He Didn't Know If He Was Undead or Simply Fabulous!!! 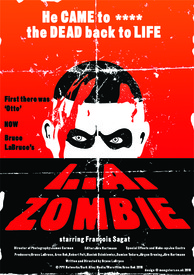 So yesterday, I was once again immersed as is my wont in the great comforting warm bath that is the New York Times Arts and Leisure section when the following interesting and alarming item caught my eye:

Could there eventually come a day when our popular culture’s disposition toward all things zombie-related goes from fixation to saturation, from saturation to revulsion, and from revulsion to a point where people are actually persecuted for showing zombie movies? Richard Wolstencroft, the director of the Melbourne Underground Film Festival in Australia, might argue that the day is already here.

But then again the zombie movie he tried to show at his festival over the summer is not exactly your ordinary horror flick. In July, Agence France-Presse reported, the Melbourne International Film Festival pulled its planned screening of L.A. Zombie, a movie by Canadian filmmaker Bruce LaBruce [heh! -- S.S.]. The movie stars a French porn actor as a schizophrenic homeless man who believes he is a cannibalistic ghoul and it depicts acts of necrophilia, gay sex and male nudity. It had been rejected by the Australian Classification Board, a government-run body that reviews films and other media. Mr. Wolstencroft nonetheless held a screening of L.A. Zombie at the underground festival a few weeks later, writing in a statement that it was to support a work he believed “to be artistically significant and also as a general stand against the often conservative and regressive decisions made by the Classification Board.” That apparently led the police to raid Mr. Wolstencroft’s house on Thursday in search of his copy of the film, but he said Friday that he had already destroyed it. “We thought that police might come for the screening,” Mr. Wolstencroft said. “But they didn’t. We don’t understand why they came after all this time.”

Incredibly enough, this story is not a gag, and neither is the movie (although I'm reserving judgement on Bruce LaBruce). You can actually watch the trailer over at YouTube here; I was going to include it as part of today's post at first, but it's a little, shall we say, gamey in spots, and I didn't want want to upset anybody's breakfast.

I should add that the following also not a gag story -- Camera To Be Implanted In N.Y.U. Professor's Head -- headlined directly below the zombie item in the same column in yesterday's Times.

Words fail me, as is often my wont as well.