How Bad Could It Be?: Excuse Me, Are You Eating That? 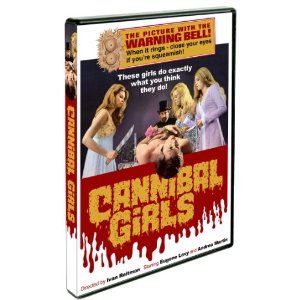 Well, I just got finished watching Shout! Factory's newly restored version of director Ivan Reitman's 1973 debut film Cannibal Girls, the long-standing cult flick favorite starring future SCTV icons Eugene Levy and Andrea Martin. I've somehow missed this one over the years, probably because there's a part of me whose nose gets out of joint at the thought of deliberately crappy Midnight Movie wannabes (I'm talking to you, Attack of the Killer Tomatoes! Bite me, just about everything ever made at Troma!). But since Reitman has made at least two films I genuinely admire (I'll let you guess, but here's a hint: one of them isn't Kindergarten Cop) and because I defer to nobody in my affection for both Levy and Martin (especially the latter; her Edith Prickley character from SCTV has always been a secret erotic icon for me, a fact that even I find disturbing) I figured I ought to give Cannibal Girls a look-see.

The plot (via a certain on-line encyclopedia with very low quality control):

The film starts off with a couple relaxing in a snowy forest just a couple of miles from a small fictional town called Farnhamville. All of a sudden a woman wielding an axe kills the boyfriend, rips the girlfriend's shirt open, and puts a dab of blood between the female victim's breast. Then, we see the protagonists, Clifford Sturges (Levy), and Gloria Wellaby (Martin) are having trouble with their location [huh? - S.S.]. Their car manages to last until they reach the small and secluded town called Farnhamville [you already mentioned that - S.S.], where it breaks down. At the same time, they come across another traveller who is looking for his missing sister (the female victim in the beginning sequence). Stranded, Clifford and Gloria check into a small motel owned by an old Mrs. Wainwright. The old lady treats the couple to an urban legend about three beautiful but psychotic women named Anthea, Clarissa, and Leona, who lured men with their seductive charm to their home only to feast on them while alive. And by eating their victims and drinking their blood, the girls maintained their youthfulness and immortality, and...

Okay, that's incoherent even by a certain on-line encyclopedia's standards, so I won't inflict any more of it on you. Suffice it to say, writer Robert Sandler's screenplay isn't going to be mistaken for Billy Wilder and I.A.L. Diamond any time soon.

Here's the trailer to give you a little better idea of what's going on in Cannibal Girls.

And the answer to our earlier question is....I dunno, a resounding "meh," I guess. Which is to say that this is the kind of 70s period piece you either get or you don't; I don't, particularly, but I can understand why you or somebody might. For what it's worth, the young Levy and Martin are fun to watch, although in the case of Levy it's mostly because of a truly heinous haircut (take it from somebody who was there -- 1973 was a really terrible year for men's coiffure) and the big Warning Bell gimmick (which sounds every time things begin to get potentially all cannibalistic) is funny for at least one or two of the seemingly countless times it sounds. Other than that, the obviously improvised dialogue often lacks a certain quality that could have been improved by actual writing on somebody's part, and there's very little else here to suggest that Reitman might someday grow up to be the director of the triumph that was Legal Eagles.

On the plus side, however, the print used for the new transfer here is in excellent shape; for a no-budget early 70s effort, this actually looks pretty good, by which I mean the color does not seem to have been timed by Stevie Wonder. Shout! Factory's bonuses include the above original trailer, some original radio ads, and a couple of backstage docs featuring the director and Levy.

Bottom line: If you are so moved, you can order Cannibal Girls over here.