From The Hunchback of Notre Dame (William Dieterle, 1939): The screen's most gorgeous redhead -- the then 19 year old(!) Maureen O'Hara -- makes her American debut in a film with the kind of gorgeously detailed black-and-white photography that recalls nothing less than the engravings of Gustav Doré. The ironies, as they say, abound. 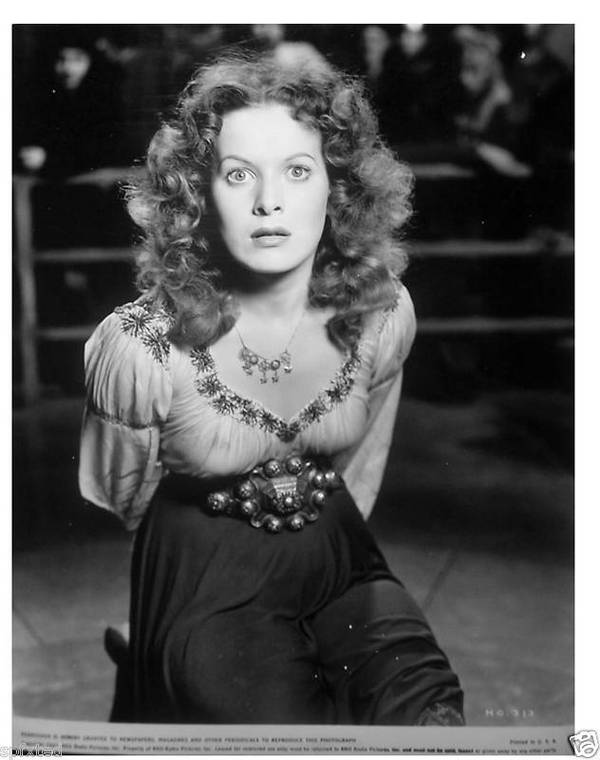 There was a Hollywood joke back in the 50s about Forrest Tucker (yes, him): He was handsome the hard way, people said -- without makeup. On the basis of the still above, I think it's pretty obvious something similar could have been said about O'Hara and monochrome.

And speaking as we were on Friday about films that would be unthinkable without their iconic musical accompaniment: In many ways the secret weapon of Dieterle's Hunchback, and one of the reasons it's still rightly considered the definitive screen version of the story, is the flavorsome score by Alfred Newman, which as it turns out borrows liberally from Notre Dame, the 1914 operatic treatment of the Hugo novel by Franz Schmidt. Schmidt was a contemporary of, and stylistically quite similar to, Richard Strauss: in his native Austria he's rated almost as highly, although until recently his music was rarely performed in the English speaking world. In any case, Newman's use of the Schmidt music is tremendously effective, so as a little bonus here's the opera's famous Intermezzo -- four minutes of the most seraphically beautifully late-Romantic orchestral writing you'll ever hear.

Enjoy. Unless of course you're reading these poor words on some kind of Apple-sanctioned handheld device, in which case you won't be able to listen  because Steve Jobs has issues with Flash. Sorry. Your home or work computer will do the trick, of course.