You know, I just don't get it -- Leslie Nielsen dies and yet Justin Bieber walks the streets a free....er, whatever-the-hell-he-is. But I kid inexplicably popular teen idols.

Seriously, I've been a fan of Nielsen since WAY before he became funny in the 80s... 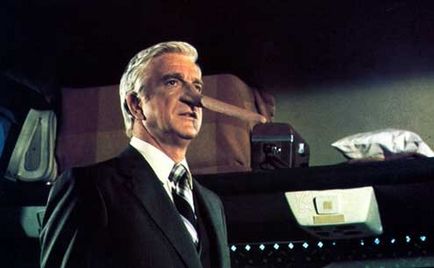 ...and so I think it only appropriate that I note his sad passing with a nod to two of his best performances from the Absurdly Handsome Leading Man phase of his career. And I'm going to exempt his turn in Forbidden Planet, perhaps the best known example of his work back then, for the simple reason that it is in fact the best known, and flag instead two examples of his toilings for television, a medium in which he was especially prolific.

The first -- and I've written about it in these pages before, but it behooves another mention -- is as the occult sleuth Brett Kingsford in Dark Intruder (Harvey Hart, 1965). 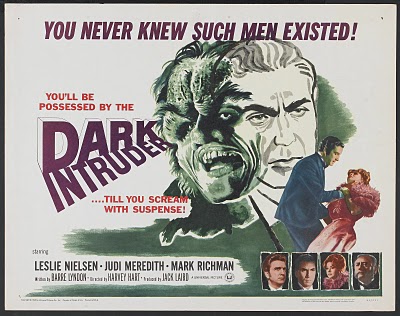 A pilot for a failed TV series that was ultimately released theatrically -- I saw it in the darkened vastness of the Hackensack Oritani, where it scared the living bejeezus out of the teenaged me -- DI is a period (1890s) Lovecraftian horror about a Sumerian demon who inhabits a human host and commits a series of horrible ritual murders. Nielsen's Kingsford...

...is in the great tradition of Zorro and Bruce Wayne, i.e., a seemingly foppish rich idler who secretly combats the forces of evil at night. But what really makes the show work -- apart from the fun of seeing the young Nielsen in a sort-of dual role -- is a tremendous sense of atmosphere; veteran director Hart keeps the whole thing quite spookily fog bound, and there's a palpable sense of dread throughout.

An even earlier Nielsen TV performance -- from 1960 -- just turned up on the fabulous Thriller: The Complete Series box set from NBC/Universal, specifically the Boris Karloff-hosted show's first episode (also the pilot) "The Twisted Image."

Directed by Arthur Hiller (later of Love Story and The In-Laws fame), this is a deeply creepy (and surprisingly frank for TV back when) story about a proto-Yuppie corporate overachiever (Nielsen) stalked by an obsessed young woman (a disturbing Natalie Trundy); it deals with many of the same class and sex issues as Fatal Attraction (I'd bet good money that FA screenwriter James Dearden had seen this at some point) and Nielsen is just great as the Don Draper-ish exec.

You can order the Thriller box over at Amazon here. I should add that "The Twisted Image" is sort of atypical for the series, which mostly dealt -- and mostly brilliantly -- with supernatural horror and fantasy a la Twilight Zone or The Outer Limits. There are scads of great examples of same in the 67 episode set, including the incredible "Pigeons From Hell" with Brandon De Wilde, an old dark house shocker that will scare the aforementioned living bejeezus out of you in the darkened vastness of your living room.

No official version of Dark Intruder has ever been on home video, and given its rather brief 59 minute running time, it's unlikely Universal will ever release a stand-alone DVD of it. But a few months ago the good folks at Creepy Classics made a more than serviceable disc available, and you can -- and quite obviously should -- order it over at their website here.

As for Nielsen, well, I have this fantasy that a few weeks before he died, a UFO landed in his backyard in Fort Lauderdale. And three squeaky voiced ETs emerged, looked him up and down and said "We enjoy your films! Particularly the early, serious ones."