Not Reviewed By Us, But It Could Be a Hot One! (An Occasional Series): Part I 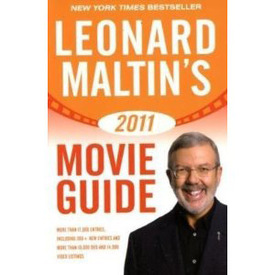 Well, I just got a peek at the forthcoming 2011 edition of Leonard Maltin's Movie Guide, the venerable and invaluable work of film scholarship that has been, justifiably, a beloved fixture on the home entertainment center coffee tables of both fans and critics since its first appearance in the dim dark days of 1969.

But I'm a little puzzled, I've got to say -- while skimming the new volume, I chanced across a whole bunch of interesting-sounding movies that I've somehow managed to miss over the years.  So I thought I'd share a few of them, along with Maltin and company's famously snappy descriptive blurbs. Meanwhile, you should probably try and keep a lookout for these if they show up on Turner Classic Movies sometime soon.

"The Knish" (1978) Picnickers accidentally dump a small potato dumpling in a radioactive area, and it turns into a gigantic blob swallowing everything in its path. Peggy Ann Garner, Roddy McDowell, Leslie Uggams.

"The Man From Somwhere" (1976) A mysterious man materializes from somewhere and makes everyone in a small midwestern town very nervous. Meryl Streep, Lionel Stander, Terry Moore.

"Amish Versus Heimish" (1979) A band of Hassidic Jews settles in an Amish town in Pennsylvania and are subjected to bitter hostility and persecution despite their physical similarity to the natives. Cliff Robertson, Sam Jaffe, Richard Chamerlain, Elke Sommer.

"The Elegant Man" (1981) The story of George Elegant, better known as "The Elegant Man," who reacted to the notoriety and celebrity of "The Elephant Man" by cultivating his natural elegance and beauty, attracting a cult of dandies and fops. George Elegant: John Hurt. With Bette Davis, Gladys Knight.

"The Drapes of Roth" (1936) A textile manager's struggles during the Depression. Paul Muni, Bette Davis.

"A Roman Springs on Mrs. Stone" (1980) An adaptation of Tennessee Williams' novel into a hardcore film with dirty words, frontal nudity and bestiality.

"Prell" (1982)  A deposed king returns to his land on the planet Prell, only to find the entire country inhabited by the Pastrami People, his bitter enemies. Kurt Russell, Anette O'Toole, Gerry Cooney.

"A Horse Called Man" (1980)  A boy is raised in the wilderness of northern Canada by wild horses, but eventually leaves them to become president of France. Matt Dillon, Joey Bishop, Bruno Ganz.