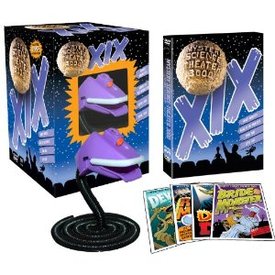 Video Event of the Week: Might Universal's DVD of Scott Pilgrim VS The World, the charming update of Walter Mitty as a nerdy video gamer starring the (admittedly overexposed) Michael Cera be what we're talking about? Is Criterion's Blu-ray of Antichrist, the latest laugh riot from reliably depressing director Lars von Trier, even remotely in the running? Or -- and I think this is at least likely -- are Sony's various newly remastered versions of David Lean's still stunning The Bridge on the River Kwai actually, you know, The One(s)?

All worthy, to be sure, and I'll have more to say about the surprisingly endearing Scott Pilgrim later in the week. But for my money, and here's a real shocker, it's got to be Shout! Factory's new limited edition box set of Mystery Science Theater 3000: Volume XIX.

For my aforementioned money, actually, this is one of the strongest MST collections yet; the four films being eviscerated by Joel (Hodgson), Mike (Nelson) and the bots are among the most deserving targets the intrepid denizens of the Satellite of Love ever had. To wit: Robot Monster (yes, the one with the guy in the space helmeted gorilla suit); Devil Doll (worst killer ventriloquist's dummy ever); Devil Fish (not a sequel, but just as crummy); and the Bela Lugosi classic Bride of the Monster (trust me -- what the MST crew does to it is equally as memorable as Martin Landau's recreation in Tim Burton's Ed Wood).

Pound for pound, in fact, this is some of the most passionately funny pop culture critque ever committed to videotape; here's Shout! Factory's new trailer to give you an idea.

I should also add that Devil Doll features perhaps my all-time favorite MST wisecracking -- an exchange during the utterly inert early credit sequence, as The Great Vorelli (the Black Hole of charisma that is bearded star Bryant Haliday) drives into London: 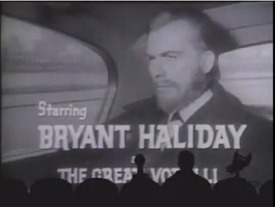 Crow T. Robot: Still -- they're not French. They have that going for them.

The new set, apart from featuring the de rigueur ultra-crisp transfers (these shows never looked anywhere near as good when aired by my local cable provider), comes with a nice selection of bonuses -- original theatrical trailers for all four films, an interesting interview with Devil Doll producer Richard Gordon (who's remarkably gracious about the MST3K treatment), four mini-movie posters, and (my personal favorite) a larger than expected plastic figurine of Gypsy, the resident feminist robot who runs the SOL's higher functions.

The bottom line, as I'm sure youve guessed by now, is that you can, and obviously should posthaste,  order MST3K: Volume XIX over here.

And with that out of the way, and because things will be somewhat sleepy around here for the next couple of days, here's a fun and hopefully relevant project to help us wile away the idle hours:

A restrained and rather shock free retelling of the classic story, but still my favorite, thanks (mostly) to a ravishingly beautiful original score by British composer Edwin Astley, including a glorious aria for the titular Phantom's operatic treatment of Joan of Arc.

I've written about this one before and it's still quite the damndest thing. There's a crazed psycho killer loose, and it may have something to do with Anita Ekberg, the aerodynamically unlikely exotic dancer at El Madhouse, a low dive run by an unapologetic Lesbian played by...Gypsy Rose Lee?  How any of this got past the 1958 censors remains a mystery that may never be solved.

A great movie, but in this case flagged primarily because of the Michael Redgrave/ventriloquist's dummy who may or may not be alive segment. For obvious reasons.

A crazed ham actor (Vincent Price, in the role he was born to play) is bumping off the critics who gave him bad notices, and the manner of their deaths all derive from specific scenes in the plays of Shakespeare. An absolute hoot, and an obvious influence on all sorts of subsequent films, from Someone is Killing the Great Chefs of Europe to Se7en.

And the Numero Uno most terrifying "What -- and give up show biz?" flick of all time quite obviously has to be...

Hey, I'm not kidding about this -- I saw this movie as a kid and Rosalind Russell's monstrous Mama Rose scared me and scarred me for life.

Alrighty, then -- and what would your choices be?