Weekend Cinema Listomania (Special The Next Voice You Hear...Edition) 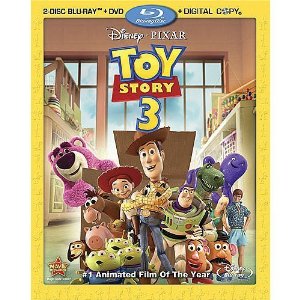 Video Event of the Week: Might Music Box's DVD of The Girl Who Played With Fire, the (eventually to be remade in America) second Swedish installment of thriller novelist Stieg Larsson's Millenium Trilogy, be what we're talking about? Could Sony's DVD of Wild Grass, the latest philosophical comedy from the great French filmmaker Alain Resnais, conceivably get the nod? Or against all that is good and holy in this world, might New Line's various disc editions of Sex and the City 2, the latest filmic entry in the continuing saga of three whores and their mom, by any chance be The One(s)?

All worthy to be sure, except for that last piece of crap, obviously, but for my money it's simply got to be -- Disney's deluxe Blu-ray/DVD combo pack version of Toy Story 3.

As for the film itself, I have little to say except that it's on balance the best Pixar production to date, notwithstanding the masterpiece that was Wall-E. This one may not be as (sorry) profound or original, but it's nonetheless about as accomplished a pop entertainment as you're ever going to see -- overflowing with wit and creativity, visually dazzling and possessed of a heart bigger than the proverbial outdoors. If the finale, the capper to the entire series and deeply emotionally and dramatically satisfying, doesn't get you a little verklempt you need to consult your physician, although part of the beauty of it is that you don't need have to seen either of the previous entries to get it.

Here's the trailer, which gives you just a hint of the pleasures that await.

Two postscripts to the above: I would like to state, and for the record, that the big action scene that precedes the aforementioned emotional finale is as scary, suspenseful and well-staged as any similar sequence in a Hollywood film in ages, animated or otherwise. Actually, I'm hard pressed to think of a recent live action seuence with anywhere near the narrative coherence that director Lee Unkrich and the Pixar artists toss off so (seemingly) effortlessly here. (Shorter version of the preceding: Bite me, Michael Bay.) 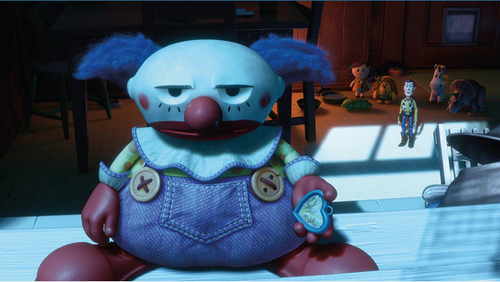 I should also add (and I've written about this before) that TS3 is worth seeing if for no other reason than the flashback that begins with the shot above; Chuckles (as sad a clown as ever was, and if his name isn't a sly homage to a classic Mary Tyler Moore Show episode than I'm Marie of Rumania) is about to launch into a voice-over explaining why the sinister Lots-O-Huggin' Bear (a brilliant Ned Beatty) is so evil ("Something changed that day inside Lotso; something snapped!"). It's a great scene, on the knife-edge between genuinely affecting and melodramatically ridiculous, and it's also a very sly send-up of every solemn and portentous super-villain secret origin you ever read in a Marvel Comic.

The disc package under discussion here is predictably state of the art, which is to say that the transfer as seen on both the DVD and Blu-ray versions is flawless. If you have a decent monitor both discs have images all but indistinguishable from what you saw in the theaters; the Blu-ray is perhaps incrementally more detailed, but you can't go wrong with either. The set also includes a handy digital copy disc (I watched the thing on my iPod and enjoyed it thoroughly); as for bonuses, both discs have "Day and Night," the charming Pixar short that preceded the film in your local Hell Octoplex, plus a Buzz Lightyear featurette. There's a fourth disc with bonuses galore, including an interactive game, more making-of docs than I could count, and some other stuff I'll leave for you to discover.

The bottom line is that Toy Story 3 is not just the best animated film in memory, but one of the best recent American films period; you can order it over here and should immediately.

Okay, with that out of the way, and given that things (as usual) will be pretty much quiet as the tomb around here for the next couple of days, here's a fun and theoretically relevant little project to help us all wile away the hours:

Best or Worst Use of Flashback, Character's Interior Fantasy or Voiceover in a Live Action Film!!!!

I'm particularly fond of the scene where the dead transvestite reads his suicide note (from beyond the grave, presumably) and Wood's camera cuts, inexplicably, to a radiator in the corner of the room.

Funniest Bergman parody ever. "I am seventy-six years old. Last year I was awarded the Peace Prize for nuclear physics. I have a hernia."

Nobody, but nobody, gave better portentous VO than Cocteau.

And the Numero Uno who-is-that-speaking-please? flick of them all undoubtedly is --

1. Across the Pacific (John Huston and Vincent Sherman, 1942) 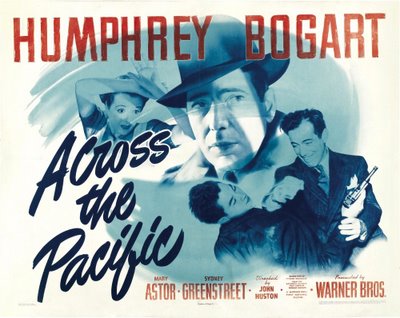