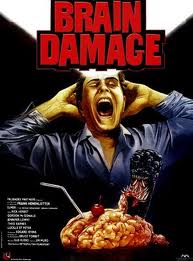 Yuppie twenty-something Brian (Rick Herbst) is nosing around his NYC apartment building one day when he discovers the strange secret that one of his older neighbors has been guarding -- the existence of an intelligent wisecracking slug creature known as Aylmer.  Aylmer, who is apparently immortal, does what you might expect -- jump onto the back of Brian's neck, like the slug creatures in countless horror movies before him -- but with a bonus: He injects a viscous blue liquid directly into Brian's brain, inducing a psychedelic ecstasy that Brian initially thinks is the greatest thing that ever happened to him. What he doesn't realize, until its too late, is that Aylmer has an appetite for human brains, i.e. he eats them, and he's gotten Brian hooked on the blue juice, deliberately, to use him as his accomplice in murder, Meanwhile, Aylmer's original human guardian is coming to get him back, and much gore and carrying on ensues, all shot at various interesting real life locations from the crack vial-littered lunar landscape of Reagan Era New York City.

Obviously, this is on at least one level a black comedy as much as a horror film, and obviously Aylmer is a metaphor for addictions of both the drug and sexual varieties. What makes it all work, of course, despite the mostly undistinguished acting and inconsistent tone, is Henelotter's absolutely fabulous dialog for Aylmer... 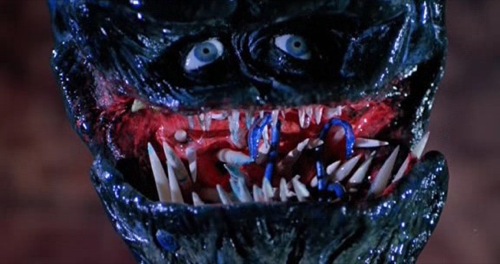 ...who is voiced (uncredited) with glorious scene-stealing glee by none other than the great 50s/60s TV horror show host John Zacherle, aka The Cool Ghoul.

BRIAN: We can't keep killing people every time you get hungry.

AYLMER: Oh yes we can,.You'll do anything I want us to do...you're mine now. I own you. Don't worry about it, I won't bite you when you're asleep.  I want you to beg for it now.

AYLMER: Oh please, Brian -- you're not going to throw up in front of me are you? I don't want to watch this. Why did you bring me here -- why couldn't you leave me home? I'll tell you why, Brian -- it's because you know you're not going to win. You know you're going to need my juice. You know the pain is going to get so great that only my juice will stop it. Only my juice will help you, you know that, don't you Brian? Deep down inside you know that...Hey Brian, why don't we go out tonight and get us some girls. You know, that's a swell idea. Let's go up to 33rd street and get us some hookers. Get ourselves a car and pile 'em in. Boy oh boy, I could eat a million of 'em tonight. MWAHAHAHAHAH!!!!!

I do not think it is an exaggeration to say that if there is a Film God in Heaven, Zacherle should be eligible for screen immortality for that sequence alone.

I should also add that Zach, who had a separate career as the hippest FM deejay in New York in the 70s, remains with us at age 92, attending fan functions like the 2009 Chiller Theater Expo and generally still being the coolest ghoul in the room. 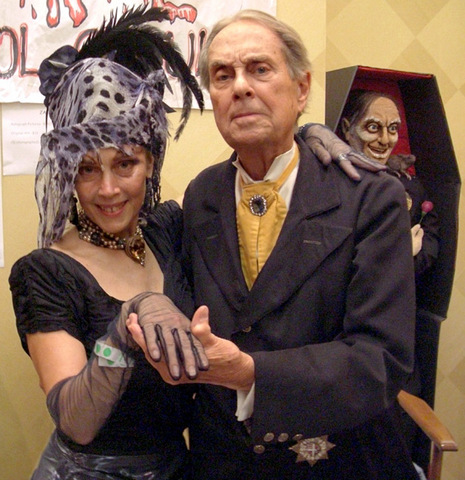 As for Brain Damage, you can see the rest of it -- minus ten minutes that were censored for nudity, apparently -- over at YouTube. There's also a very good DVD version (from whence, one presumes, the YouTube clips derived); you can order it over at Amazon here.