Compare and Contrast: I Talk to the Trees.... 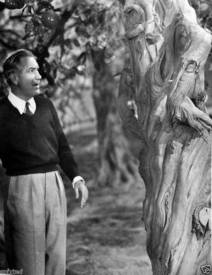 From the set of The Wizard of Oz (Victor Fleming, 1938): An unidentified technician recoils at the sight of one of the film's crotchety fruit-throwing apple trees...

...perhaps because he senses that in From Hell It Came (Dan Milner, 1957) it would be reincarnated as the vengeful jungle banyan known as... The Tabonga!

I should add that From Hell It Came is one of the my all time favorite B-horror flicks of the 50s, mostly for the scene where the Tabonga, chased around his island home by angry natives with torches, manages to elude his pursuers by hiding behind...a tree.

I'll have more to say about the Criterion Collection's revelatory new box set America Lost and Found: The BBS Story on Friday, but for the moment let me simply note for the record that the disc of The Monkees in Head (Bob Rafelson, 1968) is not only the crown jewel of the set but, after The Complete Metropolis, probably the coolest film restoration of the year. If you've never seen Head -- now in widescreen at last, and featuring the 5.1. surround soundtrack it always deserved -- suffice it to say that it's a hilarious piece of Hellzapoppin' style surrealism, a priceless snapshot of the late 60s American cultural landscape, and the most brilliant career suicide note ever filmed.

Sometimes the Jokes Just Write Themselves (An Occasional Series)

Seriously -- sometimes they do. But since the joke I'm about to make will probably occur to somebody else before the film at whose expense I'm making it gets released in February, I figure I ought to rush it into print and get the credit.

But first, by way of introduction, I should point out that this past Friday I happened to be in the darkened vastness of my local Hell Octaplex, checking out some recent releases I hadn't gotten around to previously and...

Hey, wait a minute. That means it's time for STEVE'S MOVIE REVIEWSTM!!!

The Life of a Repo Man is Always Intense. The Broads May Be Another Story, Though.

[Due to a cyber attack on the Impregnable Servers™ at the ultra-secret Iron Mountain BOX OFFICE facility, yesterday's Steve Simels Show was delayed and copy for today's scheduled Weekend Cinema Listomania was compromised. As a result, the first ever Monday Weekend Cinema Listomania will appear next Monday instead. In the meantime, enjoy the following item before somebody -- a Wikileaks supporter, perhaps? --  hacks it. - Ed.]

An E-Mail press release that crossed my desk this week, noted without comment. 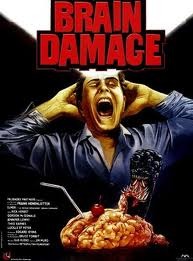 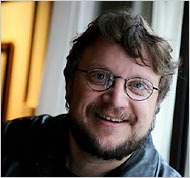 Who needs capricious and sometimes financially imperiled movie studios to finance and release ambitious content when there’s a whole world of video game companies waiting to do it? Certainly not Guillermo del Toro. Having withdrawn himself from The Hobbit movies when the future of that film franchise was less certain, Mr.

Image of the Day: Who Nose What Evil Lurks.... 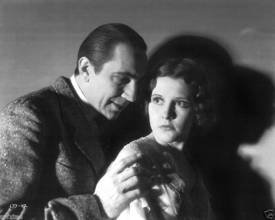 I bring this up because -- as attentive readers will recall -- back on November 10 I had a little fun at the expense of Steve Miller, author of an extremely bad book [150 Movies You Should Die Before You See] about supposedly bad movies. At the time, I took particular umbrage to Miller's dissing of The Black Cat, a film he conceded to be one of the genuine classics of 30s horror but which he nevertheless mocked because "it has absolutely nothing to do with Edgar Allan Poe's short story....