Literary Notes From All Over 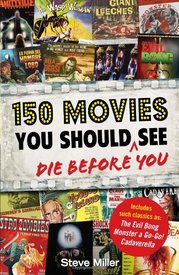 Okay, normally I wouldn't bother you about another bad book about "bad" films. I mean, obviously one man's so-awful-it's-good is another man's misunderstood masterpiece, and ultimately the point of film criticism -- or any critical writing about the arts -- isn't some kind of objective rating of aesthetic worth (which is of course impossible, and the pursuit of which leads you, a la Entertainment Weekly, to reduce all that is good and beautiful in this world to plus-or-minus letter grades).  Rather, the point, as I believe George Bernard Shaw  observed, is to make (your, i.e. the critic's) prejudices plausible. Everything else, as my fellow Red Sea Pedestrians put it, is so much chin music. 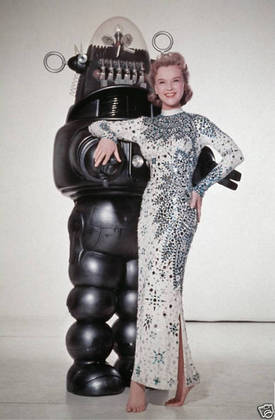 From Forbidden Planet (Fred McLeod Wilcox, 1956): Ann Francis (as Altaira Morbius) models the most expensive dress in movie history, along with its designer Robby the Robot.

Altaira: Robby, I must have a new dress, right away. Robby: Again? Altaira: Oh, but this one must be different! Absolutely nothing must show -- below, above or through. Robby: Radiation-proof? Altaira: No, just eye-proof will do. Robby: Thick and heavy? Altaira: Oh, no, Robby. It must be the loveliest, softest thing you've ever made for me, and fit in all the right places, with lots and lots of star sapphires.

Tuesday Movie of the Week 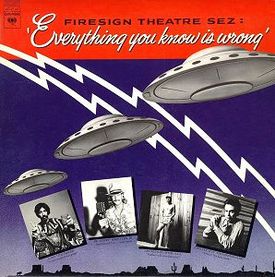 From 1975, it's the Beatles of Comedy, a/k/a The Firesign Theatre, and the feature film adaptation of their album Everything You Know Is Wrong. Digitally transferred, at no personal expense to myself whatsoever, from a serviceable over-the-counter 1993 VHS copy.

A viewing note up front: Those of you reading these poor words on some sort of hand-held device licensed by Apple will not be able to view the film, due to Steve Jobs having issues with Flash. Your home or office computer should do the trick, however.

Image of the Day: Annals of Late Capitalism

From Duplicity (Tony Gilroy, 2009): Rival captains of industry Paul Giamatti and Tom Wilkinson demonstrate what the invisible hand(s) of the Free Market are actually up to at any given moment.

I should add that I belong to the (apparently) small sub-species of humanity that believes that Duplicity -- a Stanley Donen-esque caper starring the (one would think) irresistible pairing of Julia Roberts and Clive Owen which did at best indifferent business -- is one the most intelligent and sharply written romantic comedies of the last couple of seasons.

Weekend Cinema Listomania (Special The Next Voice You Hear...Edition) 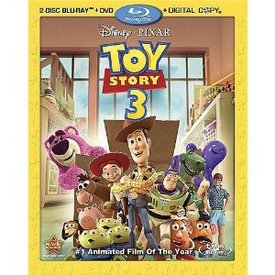 Video Event of the Week: Might Music Box's DVD of The Girl Who Played With Fire, the (eventually to be remade in America) second Swedish installment of thriller novelist Stieg Larsson's Millenium Trilogy, be what we're talking about? Could Sony's DVD of Wild Grass, the latest philosophical comedy from the great French filmmaker Alain Resnais, conceivably get the nod? Or against all that is good and holy in this world, might New Line's various disc editions of Sex and the City 2, the latest filmic entry in the continuing saga of three whores and their mom, by any chance be The One(s)?

Compare and Contrast: The Nation That Controls Magnetism Controls the Universe! 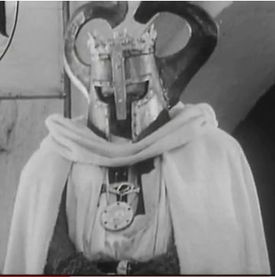 The evil Grand Master of the Teutonic Knights, from Sergei Eisenstein's 1938 Alexander Nevsky...

Nevsky, of course, was conceived (in the days before the Hitler-Stalin Pact) as a piece of anti-Hitler propaganda, meant to whip the Russian people into a patriotic froth against the looming German threat. Of course, given that Magneto's backstory has evolved over the years into his being, specifically, a Jewish Holocaust survivor, there is a certain irony in Kirby (born Jacob Kurtzberg on New York's lower East Side in 1917) basing the character design on Eisenstein's implicitly Nazi model.

From 1972's The Candidate -- still perhaps the sharpest film ever made about the American electoral process -- director Michael Ritchie explains yesterday's results to you. Robert Redford plays Bill McKay, a decent liberal pol who at the film's conclusion has just won a hard-fought seat in the United States Senate.

Sadly, the vacuity of our politics has only accelerated since this was shot. Also, Redford's gotten older and co-stars Melvyn Douglas and Peter Boyle have gone to the great voting booth in the sky.