Living up to expectations can be difficult. It is something we all face, but in the artistic community, the pressure is multiplied tenfold. Reason being, you cannot strive for objectivity. That is not to say that there are not objective qualities that we can hold art to, there are, but multitudes of critical schools and theories make pleasing all an impossibility. Self-critiquing can bring strife, worsening the problem. It becomes the artist's job to simply create, to express, to evoke. With the medium of film comes more variables, responsibilities. Now financial pressures appear, causing a dichotomy amid artistic integrity and fiscal liability. Still, one must remain true to their intent or risk becoming awash by a tide of criticism. In relevance, I am not sure where director Fernando Meirelles (City of God, The Constant Gardener) falls, though his latest film, Blindness, seems conflicted, as if the artist is at war with himself. This is a war that he cannot win and Blindness marks a battle already lost. Aside from being a cinematic mess, it only grossed $3.3 million domestically, his lowest directorial total to date. 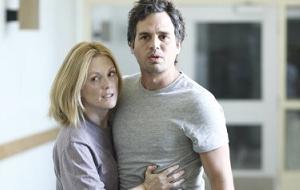 What Meirelles sets out to do here is create a world that morally encompasses our own. Actual geographical concerns are slight and no character is given a name. The titular condition unexpectedly strikes a Japanese man (Yusuke Iseya) first and it is through him we learn how unique this form of blindness is. His symptoms are very strange. There is no physical damage to his orbital complex and he describes what he sees, not as darkness, but light. "Swimming in a sea of milk," is how it is put. Soon after, the epidemic begins to spread, affecting nearly everyone, including an optometrist (Mark Ruffalo) and a thief (Don McKellar) and a call girl (Alice Braga), among others. The idea here is bold, noble even, but ultimately misguided. Ideally, the aforementioned characters and their infected peers are meant to be representative of something larger than themselves. Each have traits they embody, exaggeratedly so, yet the loss of their sight leaves them so disoriented that their personalities almost become blank slates. Their perception of the world becomes restricted to what they can hear and feel which subsequently shrinks their universe.

In order to convey this sense of being lost within one's own world, Meirelles relies on his faithful lens, his greatest strength. The aesthetic of the film, already grainy and highly-contrasting, drifts in and out of white shots, affording the viewer the experience of the characters. I pity those who saw this film by way of digital projection, as solid white screens are almost unbearably bright. The idea of pitting the audience against the film's aesthetic is an interesting one, and these washes of white are effective enough in disorienting the audience from following things too closely. By only permitting the viewer to see what he intends, Meirelles can effectively manipulate them into realizing the importance of sight and how lost we'd be without it.

Unfortunately, that marriage of function and form is short lived. While these visual motifs competently continue throughout the picture, the story becomes muddled and disillusioned. Those afflicted with the condition are sent to "camps" which are essentially run-down hospital wards. It is here that things begin to go astray and the picture's themes become heavy-handed and, by the end, overtly preachy. By forcing the newly blind into seemingly unlivable conditions they subvert to more primitive, survival-oriented beings. What is portrayed in this aspect of the film is a sloppy and brutally pessimistic look at the human condition. As the "civilization" within the camps is engulfed in turmoil, the characters act increasingly irrational. It's as if they stop being people because the way they see the world has been muted. This miniature society is meant to reflect a worldlier one and the nature of man, a motif used before in good films by better directors. Michael Haneke similarly experimented in Time of the Wolf, as did Alfonso Cuaron in Children of Men. These examples represent vastly different, yet successful expositions on how humans respond to their worlds changing. Meirelles can take notes from these men, who realized the weight of story in relation to aesthetic. In Blindness, the latter outweighs the former and ultimately drags the film down with it. Let's hope he learns from it, lest his career follows.