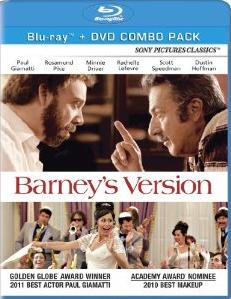 The much maligned Golden Globes provided a valuable service earlier this year. They celebrated Paul Giamatti‘s bravura turn in Barney's Version with a Best Actor nod.

The film, based on Mordecai Richler's sprawling 1997 novel, casts the Sideways star as a jerk you can't help loving.

Barney is a schmoozer, a loyal friend and an incorrigible flirt. His first two marriages end quickly, with one wrapping in tragic form. But when he spots Miriam (an enchanting Rosamund Pike) during his second wedding ceremony it's love at first sight. That Barney doesn't see how wrong it is to woo a stranger at your own wedding emphasizes the greatness in Giamatt's performance. Other actors would crumble under the weight of Barney's foul behavior. But Giamatti finds the inner humanity that turns a farcical character into someone we root for throughout his turbulent life.

Other stellar turns come from Dustin Hoffman as Barney's cop father, a man whose inner strength reveals itself in his son's zest for living, and Scott Speedman as longtime pal Boogie.

Producer Robert Lantos sums up the film during the obligatory "making of" featurette, part of a healthy assemblage of Blu-ray extras.

"This is a story of a life fully lived, of a man who makes countless mistakes but his heart is in the right place," Lantos says.

The other features include an interview with Richler conducted while the author shoots pool, smokes and reads from his own novel, a bustling commentary track featuring four crew members including director Richard J. Lewis and a Q&A with Giamatti and author Annette Insdorf.

Season of the Witch got chalked up as another Nicolas Cage bomb during its blink and you‘ll miss it theatrical run. The truth is Witch is the best made-for-SyFy B-movie yet.

Witch opens with a creepy prologue involving the hanging of three witches. We then meet Behmen (Cage) and Felson (Ron Perlman), a pair of disgruntled warriors on the run after refusing to kill more women and children on behalf of the Church. They get captured and are forced to transport an accused witch (Claire Foy) to her final trial in an attempt to smite the plague-ravaged land. Behmen suspects she's another innocent caught up in religious hysteria. But she sure acts like a witch, what with her supernatural strength and abilities far beyond a doomed waif.

Cage, renown for his scenery chewing elan, appears disinterested in his own film. Perlman, however, was born to romp around across medieval movie sets, and he lightens the tone here immeasurably.

The home video extras include deleted scenes, an alternate ending, "Becoming the Demon" and "On a Crusade." The latter lets the cast ruminate on why the film needed the montage of battle sequences in the first reel to highlight Behmen's haunted soul.

The featurette also shows how the crew made those battle scenes happen. They started out as black and white storyboards but evolved into actors romping around an L.A. parking lot with plastic swords in hand. It's a fascinating glimpse into the process of modern movie making from the ground up.

Director Zack Snyder was flying high after being selected to helm the latest Superman reboot. His surreal fantasy epic Sucker Punch quickly sent him back to earth with a thud.

Sucker Punch begins well enough, as a devastated young woman (Emily Browning) is carted off to an insane asylum by her stepfather. She learns she's slated to undergo a lobotomy in five days and inspires her fellow patients to start planning their escape. What follows is part dream sequence, part reality tweak, as Browning's "Baby Doll" character performs sexualized dances for strange men before disappearing into fantasy realms of empowerment.

Snyder's visual style remains his best asset, but other directors have done much more with less computer effects. The girls of Sucker Punch never feel real or relatable, leaving us with a virtual video game you'll be glad to see end.

The Blu-ray combo pack includes an extended version of the film with an additional 17 minutes of content, plus four intriguing animated shorts giving breadth to the fantasy realms featured in the movie. "Behind the Soundtrack" details how Snyder and co. created music to match their vision. And those curious about Snyder's intentions with the film can see him appear during the film to comment on the scenes in question.