Jonas Brothers: The 3D Concert Experience is on track to give Disney another box office hit.

A rush of teenage girls will be descending upon movie theatres this weekend as Disney's latest homegrown phenomenon, Jonas Brothers: The 3D Concert Experience, lands at 1,271 locations. 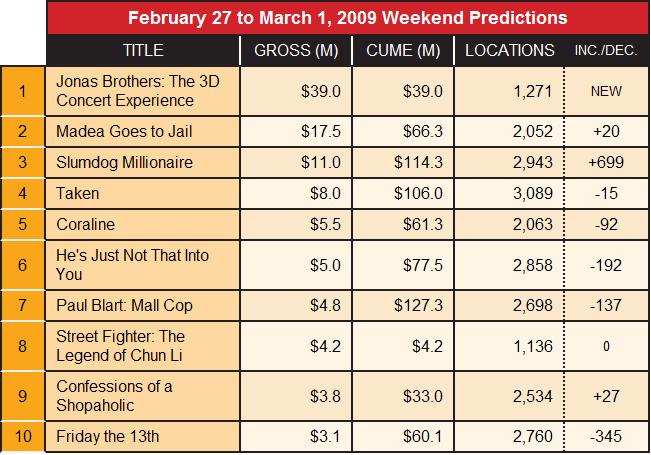 JB3D will try to tap into the same teen and pre-teen demographics that turned High School Musical 3: Senior Year and Hannah Montana/Miley Cryrus: The Best of Both Worlds Concert Tour into sizable theatrical hits. HSM3 fell just shy of the $100 million mark domestically after opening with an incredibly healthy $42 million from 3,623 locations this past October. Meanwhile, Hannah Montana, which was billed as a limited engagement before ultimately hanging around in theatres for 15 weeks, opened at 683 locations and debuted with a staggering $31.1 million in January 2008.

Die-hard fans of the band are already scooping up their tickets online. As of Thursday at 4 p.m. PT, 63% of Fandango's sales this week have been for the 3D concert flick. Meanwhile, 32% of all Jonas Brothers ticket buyers bought 4 or more tickets at MovieTickets.com.

Expect JB3D to land somewhere in between Hannah Montana and HSM3 as far as its opening weekend goes, although it could surprise everybody and land somewhere beyond $40 million.

The only other wide release opening this weekend is Street Fighter: The Legend of Chun-Li, which will be landing at slightly more than 1,000 screens. 20th Century Fox has given the film an extremely mediocre marketing blitz, and its cast boasts no box office draws. The fact that Chun-Li is based on a popular video game series could help it slightly, but that won't make up for a lack of general awareness. Don't expect Chun-Li to be in theatres for very long.

Crossing Over, an immigration drama with an impressive ensemble cast, is opening at nine locations this weekend. The film has been plagued by some negative buzz, and it has seen more than its share of release date changes. Still, the presence of Harrison Ford should serve as a decent draw. Expect Crossing Over to bring in around $25,000 from each location this weekend.

Among holdovers, last weekend's box office champ, Tyler Perry's Madea Goes to Jail, will probably lose about 55-60% of its audience. Perry's films usually double their opening weekend haul by the end of their theatrical run, which means that Madea is on pace to walk away with around $80 million before it exits theatres.

After winning the Oscar for Best Picture, Slumdog Millionaire will benefit from a significant expansion this weekend. Mainstream audiences that have not seen the film yet will now be more enticed to do so. However, after this weekend the Fox Searchlight release will probably experience some pretty sharp box office declines.