Megan Fox will try to carry the high school horror flick Jennifer's Body on her own this September. 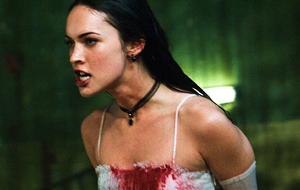 This week, we've added three new titles to our Anticipation Index. Jennifer's Body, Love Happens and Cloudy with a Chance of Meatballs all open on September 18.

Fresh off the success of Transformers: Revenge of the Fallen, Megan Fox has become a much bigger star. Jennifer's Body will test Fox's drawing power without the aid of a popular franchise, and it's a test she's likely to pass. Based on the trailer that recently premiered, Body appears to have a tongue-in-cheek attitude that will set it apart from other horror flicks. Expect the Fox Atomic release to open strong.

Jennifer Aniston is on a hot streak after Marley & Me and He's Just Not That Into You, so she'll try to keep that going with Love Happens. Her love interest in the film is Aaron Eckhart, and Eckhart's profile has improved considerably thanks to his supporting turn as Harvey Two-Face in The Dark Knight. Happens should make a perfect date film.

Cloudy with a Chance of Meatballs represents another 3D flick, and it features an impressive slate of celebrity voices from Andy Samberg to Neil Patrick Harris. While it won't be as successful as Disney's 3D release or even Monsters vs. Aliens from Dreamworks, Cloudy should deliver respectable numbers.

Check out our predictions for those films as well as other upcoming releases in the table below.