Tim Burton's version of Alice in Wonderland should prove to be another 3D success in March.

This week, we've added Alice in Wonderland to our Anticipation Index. The Disney release is set to hit theaters on March 5. 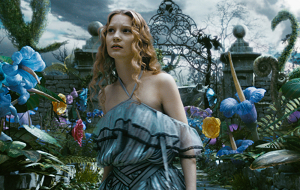 Alice in Wonderland is going to be the first major 3D release since Avatar. Mainstream audiences are certainly embracing the format in droves, and they'll be hungry for more after taking in James Cameron's epic. There's also a built-in level of trust for a new project that teams Tim Burton and Johnny Depp. Combine those two factors with a familiar property, and AiW looks like one of 2010's best bets.

The only aspect that could hurt the film's staying power is if Burton turns in a finished project that it is a little too strange for younger audiences. The director is known for his dark tendencies, and if families are turned off during the opening weekend then negative word of mouth could spread quickly.

Check out our prediction for Alice in Wonderland as well as other films in the table below.