Freddy Krueger is back this April in A Nightmare on Elm Street. Are audiences ready for a new horror reboot? 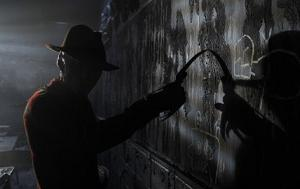 This week, we've added A Nightmare on Elm Street and Furry Vengeance to our Anticipation Index. Both films are scheduled to hit theaters on April 30.

A Nightmare on Elm Street follows in the footsteps of recent horror reboots such as The Texas Chainsaw Massacre, Halloween and Friday the 13th. All three of those films opened strong before falling fast. For instance, Friday the 13th debuted to $40.5 million, yet it only managed $65 million during its domestic run. That's a clear message from moviegoers that the new take on the series didn't work. If A Nightmare on Elm Street is going to spawn a series of sequels, then it needs to show staying power beyond the opening weekend.

The success of Summit's Furry Vengeance depends largely on the drawing power of Brendan Fraser. Yet Fraser is far from the dominant box office presence he once was. His last two efforts-Inkheart and Extraordinary Measures-opened to $6 million and $7.6 million, respectively. Still, Furry Vengeance could post solid numbers based solely on the fact that it's one of the only films in April that will be ideal for family audiences.

Check out our predictions for A Nightmare on Elm Street and Furry Vengeance as well as other films in the table below.

Tags: A Nightmare on Elm Street, Furry Vengeance, Alice in Wonderland, Brooklyns Why Did I Get Married Too?, Date Night, Kick-Ass, Death at a Funeral, Wall Street: Money Never Sleeps, Oceans, MacGruber, The Losers, The Back-up Plan, "s Finest, Green Zone, Remember Me, The Bounty Hunter, Diary of a Wimpy Kid, Repo Men, Hot Tub Time Machine, How to Train Your Dragon, The Last Song, Clash of the Titans, Tyler Perry"