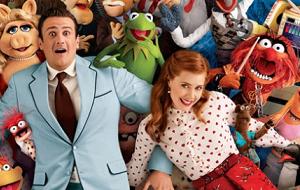 Saturday, 10/8 Update: There are no additions to the Long Range Forecast this week because no wide releases are scheduled to open on December 2. Please note that we have revised our forecast numbers for the following films: Footloose, The Thing, The Big Year, Johnny English Reborn, A Very Harold & Kumar Christmas, The Three Musketeers, Tower Heist and The Muppets.

Saturday, 10/1 Update: We've added The Muppets, Hugo, Arthur Christmas and Piranha 3DD to our Long Range Forecast this week. All four films are set to open on November 23.

The Muppets is poised to give Disney yet another four-quadrant hit. Jason Segel's labor of love will appeal to adults who grew up with the muppets as a regular part of their lives, twentysomethings who love Segel and co-star Amy Adams and young children who will be introduced to Kermit, Miss Piggy and the gang for the first time. There's no way this can miss.

Hugo marks Martin Scorsese's first attempt at 3D filmmaking, which means it will rope in more than families. Cinema junkies will want to line up to see what the Oscar winner has done with the format. This one has some decent breakout potential.

Arthur Christmas will have to compete directly with Hugo and The Muppets for the attention of families, and it's bound to lose—it just doesn't have as much going for it as the other two. Still, the Sony release should manage to become a respectable mid-level hit.

Piranha 3DD will serve as a nice bit of counterprogramming to all the family fare, but its prospects are quite limited. The original only managed $25 million during its entire domestic run.