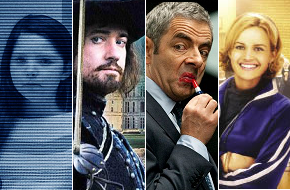 The third installment in Paramount's juggernaut Paranormal Activity franchise will have no problem claiming the top spot at the box office this weekend.

After years of Saw dominance, Halloween now belongs to Paranormal Activity. Paramount has turned the low-budget series into a serious cash cow without relying on revealing trailers and graphic violence—old school horror is clearly alive and well. Recent box office figures have been relatively slow, which means that the market is ripe for PA3 to do some serious damage. Paranormal Activity 2's $40.7 million debut is definitely in danger.

PA3's tweet counts in the days leading up to release are much higher than PA2's, and the franchise's official Facebook page has added at least 6.8 million new likes since PA2 opened last October. Subscribe to Boxoffice Pro for our full Facebook and Twitter tracking.

As of 3 p.m. PT, Fandango reports that PA3 boasts an impressive 35% of daily sales. The Twilight Saga: Breaking Dawn - Part I isn't far behind with 29%.

Look for Paranormal Activity 3 to rake in $42 million from more than 3,000 locations during its debut frame.

Opening in the shadow of PA3 won't be easy for The Three Musketeers, but it should manage to rope in any moviegoers who are already sick of found footage films. Musketeers lacks a major lead and that's bound to hurt it a bit. It also doesn't help that the story, while quite popular, has been done to death by the movie industry.

Fandango reports that The Three Musketeers has yet to crack the top five sellers list. That's not surprising considering how dominant PA3 and Breaking Dawn are.

Expect The Three Musketeers to grab a modest $10 million from around 3,000 locations.

Rowan Atkinson may be bigger abroad than he is in North America, but that shouldn't stop Johnny English Reborn from posting respectable numbers. Moviegoers may welcome some slapstick humor before being hit with overly-serious Oscar bait until the end of the year. The fact that Reborn has already opened overseas has helped boost Facebook and Twitter activity quite a bit.

Fandango reports that Reborn has yet to make an impact on their site.

Johnny English Reborn looks poised for a $7 million debut from more than 1,500 locations.

The Mighty Macs is aiming for the same faith-based audience that came out to support Courageous earlier this month. A minimal marketing push means that the inspirational sports drama will have to rely almost entirely on word of mouth. A modest opening could be followed by strong holds in the weeks to come.

Expect The Mighty Macs to take in $2 million from around 1,000 locations.