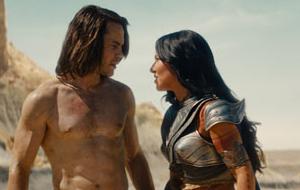 We've added John Carter, Think Like A Man, The Raven and Silent House to our Long Range Forecast this week. All four films are set to open on March 9.

John Carter has the look and feel of a summer blockbuster, but it's not generating the same level of enthusiasm as one. Activity on Facebook and Twitter is relatively weak at this point. Expectations for this one are modest by Disney standards.

Think Like A Man will appeal to the same crowds that turned Jumping the Broom and Tyler Perry's films into hits. Expect a strong opening followed by a quick drop-off.

The Raven is Edgar Allen Poe on steroids, but it should manage to rope in a small percentage of moviegoers who were enticed by the period kicks of the Sherlock Holmes films.

Silent House could be a sleeper hit. Star Elizabeth Olsen has plenty of momentum after Martha Marcy May Marlene, and this thriller could bring her more mainstream recognitions.