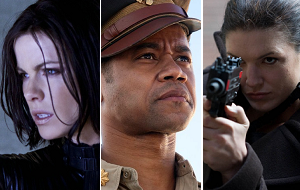 Underworld Awakening should have no problem claiming the #1 spot at the box office this coming weekend.

What do Contraband, last weekend's champion, and Underworld Awakening have in common? Kate Beckinsale. The gorgeous actress is poised to hold some serious bragging rights if Underworld Awakening makes good on the potential it's currently displaying on Facebook and Twitter. Beckinsale and Resident Evil's Milla Jovovich have shown that a female-driven action franchise is commercially viable in a field dominated by men.

As of 4 p.m. PT, Fandango reports that Underworld Awakening is responsible for 9% of daily sales.

Expect Underworld to rake in $21.5 million from around 2,900 locations.

Red Tails is surging in a big way thanks not only to the amount of publicity that producer George Lucas generates, but also to key endorsements from the likes of Tyler Perry. This one has "sleeper" written all over it.

Red Tails should grab $18 million from around 2,500 locations.

Extremely Loud and Incredibly Close expands to more than 2,500 locations this weekend after building up some buzz in platform release. While the drama's focus on 9/11 means that many people will avoid it, it helps that Tom Hanks and Sandra Bullock are on board. Expect this one to gain momentum in the weeks to come as more viewers decide to take a chance on it.

Haywire boasts one of the year's best ensembles, but too many other male-skewing flicks are in the market right now. Steven Soderbergh's latest will have to work hard to build word-of-mouth after the opening weekend if it wants to stick around in theaters.

Fandango reports that Haywire has yet to crack the top five sellers list.

Haywire should bring in $8.5 million from around 2,000 locations during its debut frame.